Mario Cuic: What Was He Thinking?

Mario Cuic is a photographer based in Germany. 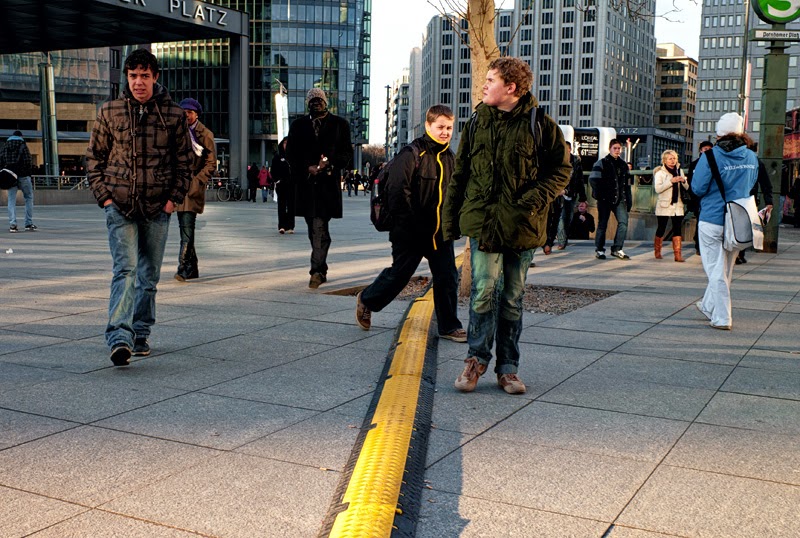 The picture was taken after my first exhibition with Seconds2Real in Berlin in 2011. At night after the vernissage I had some beer with the guys. The next day with a little hangover we had the plan to do some walking around Berlin. I met Siegfried Hansen and Guido Steenkamp. We weren't focused on the surroundings. We were more talking than taking pictures. At the Potsdamer Platz, suddenly we remembered the reason we walking around. Everyone went straight on his own way to look for something. I still didn’t really feel it, and I searched for a nice place to have a rest. I found a striking yellow cable cover with a breaker box and sat on it hoping that something might be happen soon. After 15 minutes, nothing had happened. I became inattentive. Precisely when I decided to leave I saw this boy far away, wearing a jacket with a conspicuous yellow zipper. Perfect, I told myself and prayed that he came in my direction close to the yellow cable cover. My prayer was heard. The boy came directly to the yellow cable cover. I waited with the viewfinder in front of my eye for a good moment. I think I took 3 shots. During the second shot, the boy steped over the cable cover and looked straight into my lens. The surrounding people are also mostly in good position. I smiled, the boy didn't stop. He walked away and my hangover was gone.

Hi, lot of thanks for share always good content. Two, three and four photos are my favorites. I wonder why people don't comment about this posts, I am always interested in the editing part of photography and I can't find the others photos so interesting. Nice comments by the way. All the best and my best wishes for a best shot tomorrow.

Makes me want to see more pics from Mario :D

Tallenge, an online Talent Platform is having their monthly Photography contest. Once you upload your entry, it enters the monthly contest with the prize money of $100. Once the monthly contest ends it automatically moves in to the quarterly contest where it competes for $2000 & finally it moves in to the annual contest which is worth $10,000.
No entry fee. All you have to do is upload your Photographs & invite your friends to vote for you.
Rules are simple: The photographer with maximum number of votes on his photograph wins the contest.
So all you Talented Photographers, it's your chance to compete against some of the finest photographers around the world & win some money!
So go ahead & Upload your best clicks on TALLENGE website now!
Link to participate: http://www.tallenge.com/contest/photographycontest30.html

Terms and conditions:
No theme or restrictions on your creativity. You can go ahead and upload your best photographs.

Max of 5 photographs per contest & the participant must be above the age of 18 to participate in the Tallenge photography contest.

It's always interesting to hear street photographers discuss how they get the pictures they do. I'm going to guess that the strength of his work is proportional to the amount of time he puts into walking around. In my experience, there's a direct correlation. People who win the lottery are usually hardcore players. It's a game of chance. Thanks for the background, Mario.

Very interesting content, I am an amateur photographer and information such as yours gives me lots of ideas. Currently I am competing in a contest organized by tallenge. Please keep posting facts like these, it'll be very helpful for lots of people like us. Thanks a lot.