Melanie Flood is a photographer and curator based in Portland.

BA: How large a role does chance play in your work? And in your life?

MF: Place has a huge influence on the type of work a person makes. It was by chance I met my husband on a street in Tribeca yet it was my choice to wear a blue leather dress. It was not by chance that we visited the PNW after we were married, yet it was a choice to move. My college friend was from Portland who I would visit and perhaps she is the true reason we live here. Chance is determined by the percentage of deliberation that goes into a decision and all the contingencies which follow.


Who is your favorite photographer from the 1970s and why?

I don’t have a favorite photographer from any decade but admire Sanja Iveković and her piece "Double Life" (1975) Marcia Hafif’s “Pomona Houses” (1972), Lynda Benglis’s advertisement in the 1974 issue of Artforum, Judy Chicago’s “Dinner Party” (1979) and Nan Goldin’s early photographs are among my favorite things made during the 70’s.

Name a photographer working now whose appeal cannot be explained to you.

It wouldn’t behoove me in a small city to name names, but there are certainly artists & styles of photography being highlighted which don’t interest me. Explanations may strengthen my like or dislike but could never take me from dislike to like. There is one artist Aaron McElroy whom I first met in 2009; our mutual friends tried to sway me to his photography-they never could but I saw potential. During his recent show at Ampersand it was clear that Aaron had made great strides in building his visual language, which led me to better understand his aesthetic. Seeing growth out of potential is often more satisfying to me than the work itself.

How do you conceive of a photo project and how do you know when a project is complete?

For my studio work Suggested Experiences I have visualizations while falling asleep, or in dreams that are based on blurry memories or a random concept I’m thinking about which I attempt to build out and represent. Each photo is a one off which may come together over time based on their similarities. U-Turns, K-Turns is about the anxiety of picture taking while traveling. My only ‘body of work’ is twelve 16x20 C-prints that I completed as an undergraduate student at SVA. I consider Lost Bag, Found Bag a finished piece even if it’s just two photos. The process of looking, thinking, shooting, of just going to and being at my studio are all an integral part of my making work and the work having agency. The entire action of my exploring this inclination to create is more important than having an object to show for it. But! When I take an i-phone snap of a Polaroid and text it to a friend that’s when I know I’m onto something...

Nine months of Polaroids? What's that about?

It’s a photo of a stack of Polaroids I shot in my studio over a period of nine months. Sometimes when I’m working I become so disconnected from reality that I don’t even know how I got to the final photo- I attribute this to my working fast, changing arrangements immediately if I dislike them. I take a Polaroid of every change, no matter how small. Nine months of Polaroids is a document and timeline of that dizzying dance.

You have a fascination with photographing textures and materials. Does that apply to those materials in real life too, or only to photographs?

All of my friends know my ‘full panda’ outfit, so yes, in real life too. I love fashion, it’s an extension of expression. I’ve always picked up ribbon here and there, stacks of fabric meant for unrealized sewing projects. I wanted to incorporate this interest directly into my work. I chose materials for Color Studies with attention to the garish, reminding me of vibrancy in nature, anomalies like rainbows, which mimic my reaction to my first summer living in the Northwest. I had a friend visit from back East. She wanted to go on an adventure. I heard about a psych-trance party in the middle of nowhere. We drove toward Estacada, finally reaching our destination about 20 miles into the woods off logging roads. It was a fluorescent marriage of epic proportions. The dense forest a place idyllic for solitude was visually being divided by laser beams and moonlight. I saw color in an entirely new way. Using that experience as a point of departure I needed to hone my technical skills. In creating a controlled studio environment I began to think of three categories of painting- still life, landscape and portraiture. This led me to the drapery studies of da Vinci which are common exercises in learning how to draw. I was aware of the ‘fabric as backdrop’ trope in conceptual still lifes and the materials versatility-spandex for a swimsuit, wrapping paper for a gift, I wanted to document them without any added elements and only manipulated by my arrangement.

Tell me about the first photo you ever made that you still like.

It’s a portrait of my mother, brother, aunt, two twin cousins and grandmother taken on Christmas 1988 in my childhood kitchen with a newly gifted Le Clic. I was 9 and much smaller than my subjects so I was shooting upwards to get their bodies in the frame. It was the first photo I recall taking and the last photo of them together, later that night my grandmother had a heart attack and died shortly thereafter. Everything else changed.

Tell me about this photo: 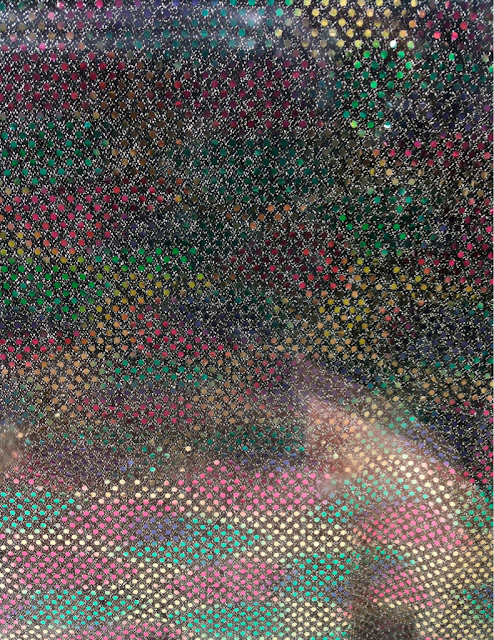 I like to take self-portraits in window reflections a la Friedlander via Max Kozloff. The metallic reflectors caught my eye, so I snapped it.

What do you think of Portland's photography scene?

When I moved here in 2010, I was very excited to jump in and be involved with the art community, particularly photography. I had been a panelist for Photolucida Critical Mass a few times, and also checked out the Blue Sky Exhibition Committee. I joined the Portland Art Museum Young Patrons Society, attended a few photo council meetings and became an early supporter of Yale Union. I shopped at Monograph Bookwerks, hung out on First Thursday, was terrified by Last Thursdays. A group of photographers from New York that relocated to Portland started a crit group rotating between studios and later I became involved in ‘Talking Gang’ which includes artists working in various mediums. I’ve been in three local shows this past year, made new work that excites me, and have good stuff on the horizon.
Writing about Melanie Flood Projects, you said the photo world is like a high school social scene. Do you think Portland is like that?

I don’t think so. What Portland lacks in exhibition opportunities it makes up for in its supportive community of artists which fosters growth and experimentation. I’m sure a high school-esque competition exists here, but not amongst my peers. I’ve had quite the opposite experience, and that’s part of the reason I enjoy living here. Artist friends Samantha Wall and Stephen Slappe, Teresa Christiansen, and Tricia Hoffman have made my transition to town and refocus on art making an inspired one. I wouldn't be as productive and motivated without their constant support and feedback.

How would you characterize the exhibition environment in Portland compared to New York?

I cannot compare Portland to New York but needless to say, it’s natural to be underwhelmed. New York state has over 2000 museums, the city over 1500 galleries with connections to major curators, relationships with critics and writers, and a necessary collector base which keeps art galleries operating. There are endless opportunities for exhibition, higher education, residencies, jobs, internships with established artists.

Our two main photography venues are also educational resources. Blue Sky and Newspace are non-profit organizations whose exhibitions must appeal to a broad audience- photojournalism, documentary, portraiture, than more experimental work shown in a larger city. It’s crucial to showcase a variety of work that represents current photographic trends, whether that’s digital manipulation, photo sculpture or the conceptual. I do detect a curatorial shift occurring-in 2011 Blue Sky chose Millee Tibbs’s This is a Picture of Me for their smaller gallery and Newspace’s Photography at the Edge presented photography in less traditional ways. In April during  Photolucida Portfolio Reviews, the PAM photo council invited Alec Soth to the museum for an unusual lecture where he projected an exhaustive list of powerpoint presentations and answered questions from the audience as he spoke. (Afterwards during his book signing gaggles of women were swooning and cooing all over).

I generally dislike separating photography from a larger art scene, but I feel that distinction in Portland much more than in New York.  There are a lot of Portland based photographers and few spaces to exhibit their work alongside other mediums, and even fewer spaces that have a collector base. It creates a line between artists and that of hobbyists, amateurs and straight photographers. In recent years spaces like Yale Union have brought solid programming to Portland which set the bar higher -the Marianne Wex show in October was particularly challenging. Terrain Shift at Lumber Room was a delight. John Motley is delivering a much needed critical voice bringing international attention to Portland by writing for Artforum. The opportunities for grants from the Oregon Arts Commission and the Regional Arts and Culture Council are an amazing resource to fund creative ideas and bring them to the public. As Portland’s art community grows, it’s also easy to be overwhelmed by all the opportunities to pitch in.

What about the style of shooting?

The strength of setting and regional influence appears to be greater in Oregon than in New York. I see a lot of 1970’s nostalgia, retro cinematic aesthetics, alternative process, as well as outdoor lifestyle stuff.

Do you ever envision opening a gallery in Portland similar to Melanie Flood Projects?

Melanie Flood Projects began because my friends at the Humble Arts Foundation were dominating (rightfully so) the rebirth of photography in New York. I was inspired by my peers entrepreneurship and the long history of showcasing art at home- Hans Ulrich Obrist's first exhibitions were in his kitchen. There was an opportunity to add something special to an already vibrant, motivated, emerging market. Upon arriving to Portland I curated a show at the now defunct Worksound Gallery. It was a mix of drawings, video, installation, sculpture and photography. I wanted to test the waters before diving in, it was cold. I’m into future curatorial experiments but would not involve me opening a space and would look very different from what I did in Brooklyn.
Posted by Blake Andrews at 1:21 PM