Don Hudson: What Was He Thinking?

Don Hudson is a photographer based in South Lyon, Michigan. More of his photos can be found here. Most of the images below are from his recent book From The Archives.
• 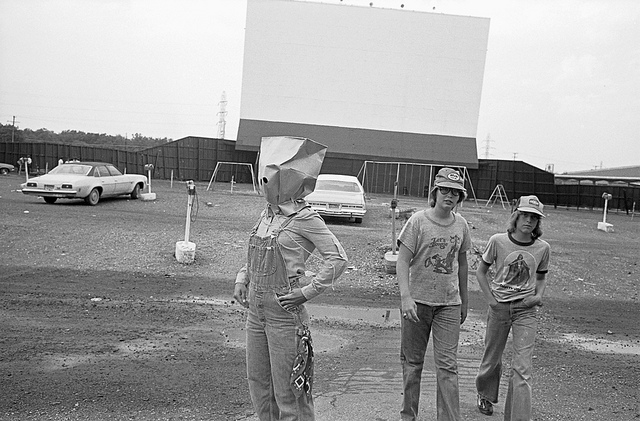 This photograph was made in the staging area for the Farmington Founders Day parade. A little background.  I've never made my living at photography and consequently have been primarily a "weekend" photographer for the most part during the last 40 years.  Within those practical restraints I have favored photographing at events, where people step outside their everyday routines and there is very often a concentrated social energy on display.  And honestly, I was also out to have fun at these events!  My own particular photographic "game" that I play at these events is experiencing how close I can get with participating in this social energy while maintaining enough detachment to work out an intelligent picture.  The community of Farmington MI used the local drive-in (no longer there) as the staging area for their parades.  For me, it's often the time before a parade begins that is the most interesting, with participants in various stages of preparation and anticipation, a sort of informal haphazard craziness.  I don't remember exactly what I was thinking when I made this shot, but most likely something along the lines of:  ok, position the drive-in screen as backdrop, check, woman with bag over her head, check, kids coming at me wearing graphic t-shirts, check...now don't blow it!  Turned out I liked how the camera saw it.
• 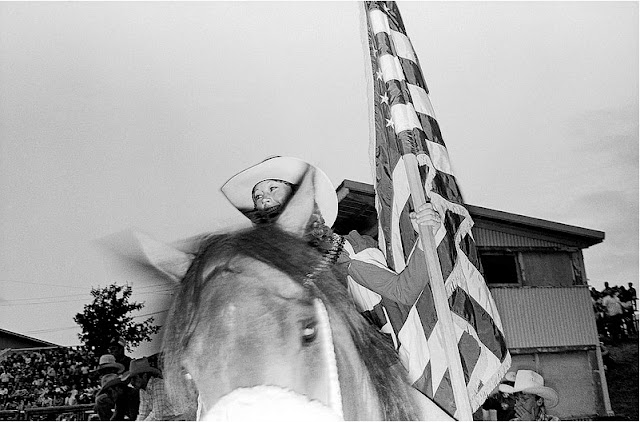 And speaking of how the camera is able to see things, this shot is definitely representative of that for me.  Saline, where this picture was made, and South Lyon, where I live, are (or were) both considered horse towns, and both held annual rodeos.  I loved photographing at these rodeos, and did so at several of them.  And I also loved using flash, especially during that short time period in the transition from daylight to nighttime.  It's a fleeting moment and my senses are heightened to the possibilities of how things might look to the camera.  And whenever the flag comes out I'm usually all over it.  That's the scenario here.  Later on, after the film is processed, and I look at the contacts, I see what the camera and flash saw in that instant.  The horse's ear and shadow and the girl's hat perfectly ensnaring her expression, and the horse's seemingly rolled up eyes indicating such.  A serendipitous moment generously offered by the camera, and which I most humbly accepted. 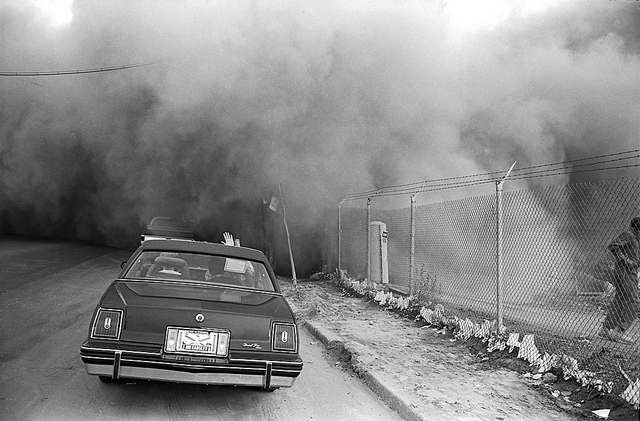 This shot was made in 1981 in Hamtramck, Michigan.  I was visiting my good friend that day, who lived in Hamtramck at the time, and we decided to go over to where they were tearing down the historic and culturally significant Dodge Main assembly plant in order to make way for a new General Motors assembly plant.  We parked our car behind these guys in front of us who were there celebrating with a couple of bottles.  Truth be told, my friend and I most likely had been engaged in our own "celebrating".  Anyway, we saw a blast, and as a section of the building started to come down I began to shoot.  In the fifth frame (this one), as the dust cloud rapidly approached, one of the guys whooped and stuck his hand up through the open t-top.  I got the shot and quickly ducked into the car to ride out the dust storm. 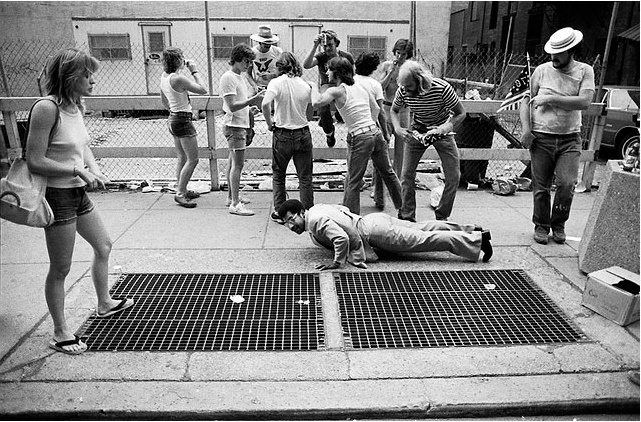 Many people reading this might very well agree with the idea, espoused by Winogrand and others, that one should detach themselves emotionally from the act of making the shot when evaluating the picture.  One way to do this is to have a significant amount of time elapse between the making of the shot and its evaluation.  Generally, I agree with this strategy, but in the case of this particular photograph, made nearly 37 years ago, I have never completely detached myself emotionally.  In early July 1976, four weeks before I was to be married to my soulmate, my good friend (same person as in the Hamtramck picture above) and I decided to go to Philadelphia to check out the craziness surrounding the Bicentennial.  It would be my own significant initial immersion in photographing an "event".  We also met up with a couple of others from the Detroit area photographic community who had traveled there to photograph.  I must say that I had a ball.  At one point, on the second day, my friend and I were wandering the streets, loosely together, when we came upon this group engaged in some sort of revelry/impromptu street theater.  We could relate to what they were doing and both of us started making some photographs, and then this guy in a suit saw us and came up and asked if he could do some push-ups for us.  We looked at each other, laughed our heads off, and said something like "of course!".  This is the shot.  From that point on, on the way back to Detroit, days later, months later, and after years, and decades, whenever my friend and I would get together, and we had sailed far down that avenue of arcane discussion, one of us would turn to the other and play the trump card - "do you want me to do some push-ups?".  Much laughter would then ensue.  I think this is a pretty good photograph, but I plead helpless in its proper evaluation.  It has become personally iconic to me as representative of a camaraderie that is possible in this shared game of photography that we play.  And I swear to god, if I am on my deathbed, and someone was to mention doing push-ups, a knowing cackle would be my last breath. 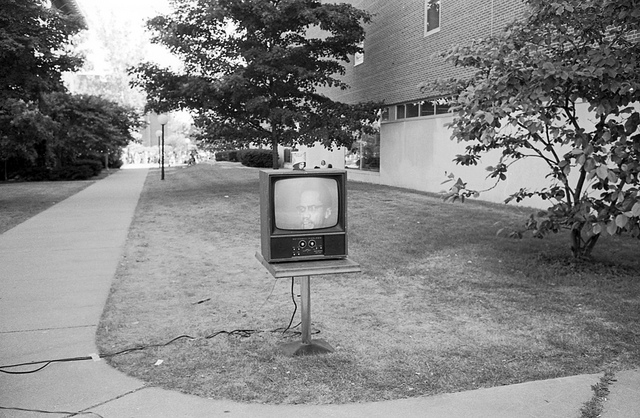 This is one where I don't remember anything about the circumstances surrounding it.  I do know it was made in 1974, on the University of Michigan campus in Ann Arbor, and according to my contact sheet I made 5 shots of this scene.  This one is the first of the five.  The next one has a person next to the tv monitor, and the two after that have a dog in the foreground.  The last one is similar to the first, with a different image on the tv.  All are shot from basically the same position with an almost identical point of view.  I'm not sure what to make of this, except to say that, as the picture might represent a ghost in the machine, the photograph itself suggests a ghost in my own archive. 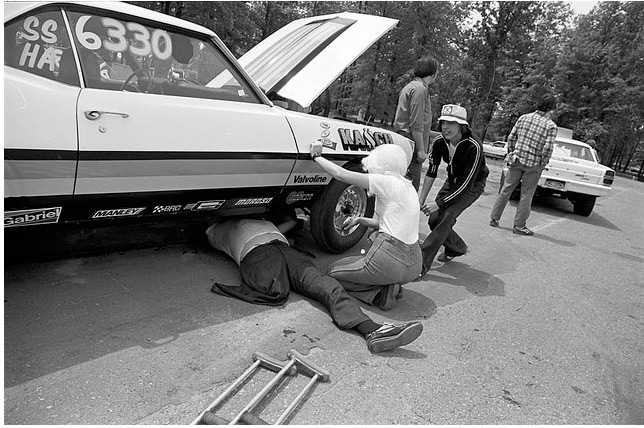 At Milan Dragway near Milan, Michigan  1978.  Maybe it's because I was born in Detroit, but since I was a kid I've had a bit of an obsession about cars.  As an early teen in the mid-sixties I went to Detroit Dragway a couple of times, and remember seeing Art Arfons run his Green Monster.  In 1978 I decided to check out the current drag racing scene and paid a visit to Milan Dragway.  The Milan operation was more mom and pop compared to Detroit Dragway and access was no problem.  I remember being free to roam pretty much at will, most likely very different from what it would be like today.  But again, I don't really remember what I was thinking specifically.  But come on, a headless one-legged mechanic being assisted by a platinum blonde bouffant hair-doed woman at the drag strip?  I was probably thinking something like, this kind of subject matter is gonna demand a big effort on the composition side.  According to my contact sheet I made five shots, and this being the fifth and the one I circled.  I think I wound up with a shot with a nice tension between form and content. 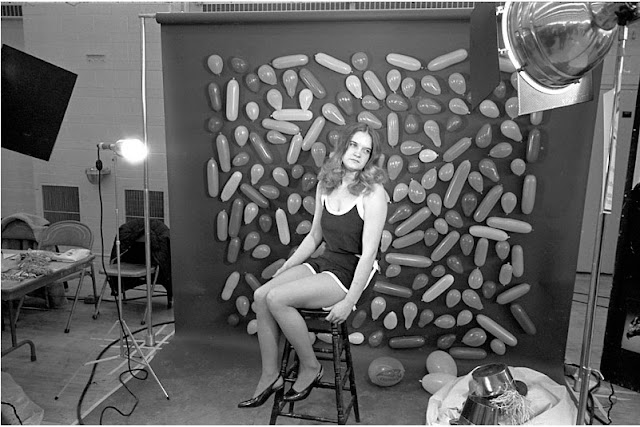 This was made at a "Photo Show" somewhere in Detroit in 1979.  Not sure anybody does this kind of thing anymore, but back then there were these occasional shows put on by promoters who would secure some nondescript public facility and have local camera clubs set up booths with various kinds of models to photograph.  I don't know how the money changed hands among the clubs, models, and promoters, but there was an admission fee at the door.  I went to a few of these, and let's just say that I'm fairly certain that my head was in a different place than the vast majority of photographers who came to these events.  For me there was so much more to consider about what was on display than choosing which f-stop to select or coaxing a certain tilt to a model's face.  Sexual politics in the culture, photographing the act of photography, manufacturing spectacle for photographic consumption, these events offered up a goldmine of possibilities for photographic discourse.  In this particular picture, amidst the concrete block walls, the metal folding chairs and tables, the cheap festive balloon backdrop, the open bag of props, the makeshift lighting, the woman's awkward perch and thousand yard stare reflected back to me my own recognition of one of those laugh to keep from crying moments. 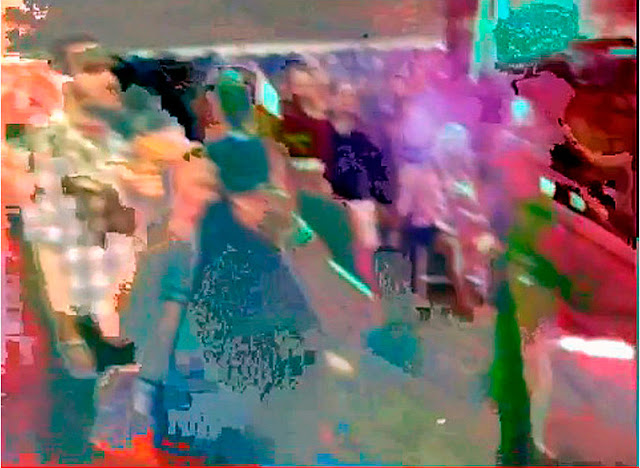 Oh yeah, this one is very interesting to me, but maybe for reasons that have more to do with how it came about than for anything that can be perceived by a viewer of this image alone.  Last summer I went to the Ypsilanti Heritage festival mostly to have a good time and make photographs in the beer tent.  Something I've always liked doing dating back to the seventies.  I mean, what's not to like?  Live music, drinking good beer, and making photographs...sounds like a little bit of heaven on earth, no?  Anyway, I'm in the beer tent, having a few beers, at the front of the stage, making photographs of the people in the crowd, the bands, the people interacting with the bands, me interacting with the people and the bands, and so on, when I notice this woman with an iPhone making a video of the band on stage.  So I start making photographs of her making the video.  When, near the end of the song being played, she swings the phone/cam to the crowd at the front of the stage at one point aiming it directly at me.  I fire off a shot at her.  Cut to the next day, and I'm on YouTube looking up a couple of the bands I saw the night before when I notice a video that has just been posted from the Ypsi Heritage Festival.  I recognize the particular song from the night before and realize it's the video made by the woman I photographed.  When her video swings to the crowd I see myself, and when, in the video, I photograph her, my flash literally freaks out the sensor on her iPhone.  That's cool!  I think, and grab a screen shot, and post it to my Flickr stream.  The result, an unknowingly collaborative self-portrait, my own image/identity in pixels, transforming through servers and internet platforms.  Fascinating to me.
Posted by Blake Andrews at 7:29 PM

Great post! Wonderful images. I can identify with the "weekend photographer" sentiments.

Great stories!
You want me to do some push-ups now?

Is it just me, or does this just look fresh, vital and mercifully humorous after 35 years of color?

Brilliant stories, all around Blake. Much appreciated. And the last one is particularly cool in how it came about.

Don's 'vault of gold'. I often wonder what he cuts that never makes it to daylight. What he does upload is golden.

I have learned sooooo much from Don Hudson! I think we can all relate to him, I'm not a pro--but I love to take photos, he is better than the 'every-man' but he represents us in a way.

Fantastic post, I'm so glad to see that Don is getting some recognition!