I go on binges occasionally in which I get obsessed with a certain camera, then shoot the hell out of it until I get bored or it breaks or some other camera comes along. Lately that camera has been the Fuji Instax 210. I wrote a bit about it back in January. After that post my interest flagged for several weeks, but in the past few months it's been rekindled in a big way. On many outings it's become my go-to camera. One thing I love about the camera is the immediate tangibility of the pictures. You click the shutter and it spits out this thing. It's not on a screen, nor is it locked in the dark like film awaiting development. It's a real object which you can put in a pocket or give away or fan your face with or whatever you want. It's a real thing you've got to deal with. But before that happens is the delicious period when you wait for development. The picture starts blank, then after about a minute the colors gradually come in. It takes about five minutes to fully saturate. I don't think I will ever get sick of watching the Instax photos form. It's like photo crack. There's an incredible sense of anticipation, then the rush slowly comes on, the photo fills in. After a few minutes it's done and you're ready for the next one. I think I could pass a whole day shooting a photo, watching it develop, shooting another, and so on... 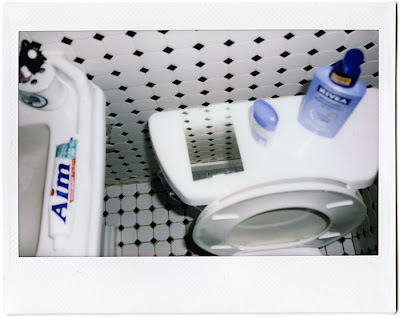 Aim, 2012, Blake Andrews
Instax Gratification
I've heard many people discuss their first time in a darkroom, the magic of watching the image appear gradually in the developer tray. Some people say that's what hooked them on photography. Personally I've never really had that feeling in the darkroom, but I think waiting for Instax photos gives me a similar sense of magic. Unlike the darkroom it's always a surprise. Will it be blown out? In focus? Where will the edges be? In the darkroom I usually have a much better sense of these things. But with the Instax I'm never sure. The old saw applies. The only way to find out what something looks like photographed is to shoot it, then wait five minutes. Instax film is relatively expensive and sometimes I will cheat by taking a digital snapshot first, just to make sure my Instax photo will be in the ballpark of what I want. I see this as a nice ironic twist on history. In the film era Polaroids were traditionally used by photographers to check a scene before the "real" photo was made. I'm doing it backwards. 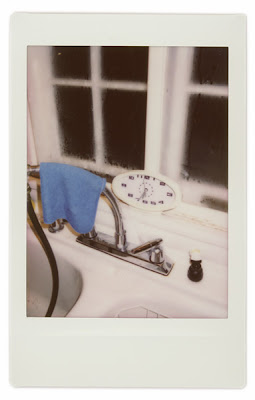 Untitled, 2012, J.M. Colberg
Instax Gratification
Joerg Colberg wrote about the photo as object briefly last week. He approached it from the perspective of the art market but I think the general question applies to simple Instax snapshots. What is the meaning of the photo as an object, and how does that compare to its meaning as a pure idea? With the Instax I think there is some ambiguity. I enjoy the photos as small shiny objects. But I also love how the camera interprets a scene. I love its palette and how it treats light, and the small white frame locking it all in. I make scans of my favorites, and even on a computer screen they hold my interest. A few days after Joerg's post, Andy Adams ran a poll on FPN:

The tally (so far) is 51 votes for Image, 4 for Collectibles. A landslide. Perhaps this isn't surprising considering that the poll was conducted online. After all, on the web there's no such thing as a collectible object. Every image is an idea, a digital representation. Even if the original photo is a precious object, the corresponding jpg is not. So an online poll might be expected to reflect that. When it comes to my main photographic pastime, 35 mm film, I'd vote for Image over Collectible. Generally after I expose a photo and make a work print of it, I'm done with it. I've seen what the image looks like. I've either captured something or I haven't, and after that issue has been settled I don't much care if it's printed this way or that or toned or framed in mahogany or whatever. Hunters aren't cooks, said HCB, and I think there's some truth in that. But with the Instax you can hunt and cook at once. 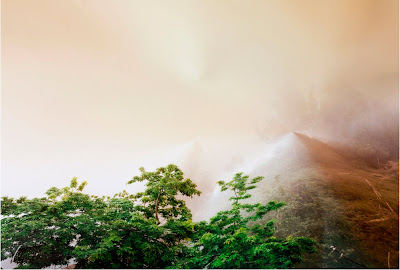 Response to Print of Trees and Fog, California, 2011, Laura Plageman
A recent trend in photography is to experiment with the photo as an object. Stephen Gill and Gerhard Richter play around with paint and flowers laid on prints. Laura Plageman folds up her photos and then rephotographs them. Matthew Brandt soaks his prints in various bodies of water. The popular revival of archival processes such as wet collodion, tintypes, photogravure are part of this movement. 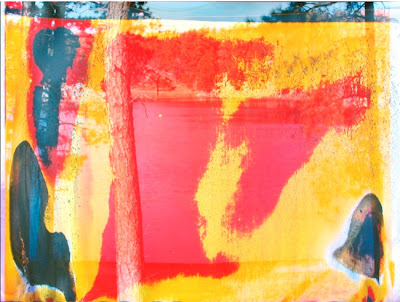 Horse Thief Lake, WA, 2008. Chromogenic print soaked in Horse Thief Lake water, Matthew Brandt
I think the fetishization of objects is a clear reaction to digital imaging. Until a digital image is printed (and most aren't) it has no substance. It's a computer file. These files are now the lifeblood of photography. To share work online you post files. To enter a call for submissions you send files. Many exhibitions are printed on site by a gallery or curator from files sent by the photographer. The print is secondary, a simple byproduct of the image. I was reminded of this reading about the fallout from Cruel and Unusual at Photoville. I'm not sure where the prints originated. They were shown for a week, wilted in the heat, then destroyed at the end. In this context the print was relatively unimportant. A new one could be generated from a file or negative. This seems the farthest extreme from the museum ideal of a precious object on the wall, and to be honest I am sort of in love with this idea. It's like the Tibetan monks who spend days making a sand mandala grain by grain, then sweep it away at the end. Yesterday while taking photos in Eugene's Whitaker neighborhood I brought along a stack of mis-exposed work prints and stapled them to telephone poles, tucked amid the concert posters and lost dog fliers. I like to think of someone approaching these photos and trying to understand the motivation behind them. No message, nothing to sell or say, just photos for the sake of photos. They might last a few months before fading or being torn down. Who knows. It's the thought that counts.
Posted by Blake Andrews at 9:22 AM

Re: telephone poles - that's a great idea. That's what I'm going to do now with all my test prints. What the hell else am I going to do with them. Seriously.

Also - is it too late to get in on this Instax action?

I recently bought a Fuji Instax 210, it's been one of the most liberating cameras I have experienced. I use some small magnets and my fridge for a gallery, some make the cut, more don't. At this point, I don't even want to scan them, I like the fact they can only be found there, a one of a kind, displayed on my fridge.

Update, 7/15: I biked through Whitaker this afternoon and most of my photos had been torn down. Not sure why but it's kind of a bummer. Maybe they were seen as ugly or as outsider art. It's not exactly a rough neighborhood -no neighborhood in Eugene could be called "rough"- but Whitaker definitely has closely knit identity which is a bit separate from Eugene. For a period in the mid 90s it was the center of America's anarchist culture, or is anarchist center an oxymoron? So maybe the photos cramped that scene? I don't know but they're mostly gone.

Ripped as in there were shreds left, or carefully removed to later be sold on ebay as by a famous photographer? You never know.....

Hi! I actually love the camera and use it all the time. I just don't have the luxury of posting about it and setting up those posts frequently. :) Thanks for including my link. (I think.)