I had a fun adventure with Pete Brook last weekend. The Prison Photography guru and I met up Friday evening and camped at Big Lake near Santiam Pass, about halfway between Eugene and Portland. We ate a big dinner, drank some brews, and lit a huge bonfire in the woods.

Pete's good company. You can take the blogger out of the internet but you can't take the internet out of the blogger. We compared notes on blogging, photography, and various nonpressing issues. I should've taken notes. We solved some shit but I forget what exactly. 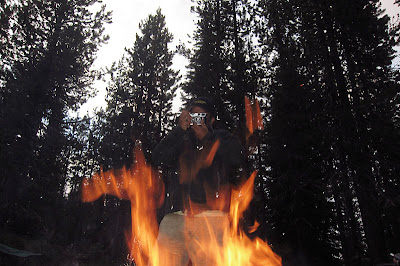 The next morning we were up around 5 am and ready to tackle Three Fingered Jack, a crumbling volcanic remnant not far away. We hit the trailhead by 6:45. Not a cloud in the sky. 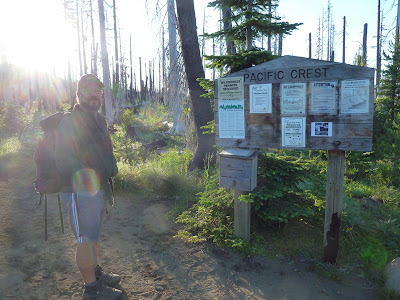 The trail started around 4900 feet and climbed steadily. About 4 miles in we began to hit snow. 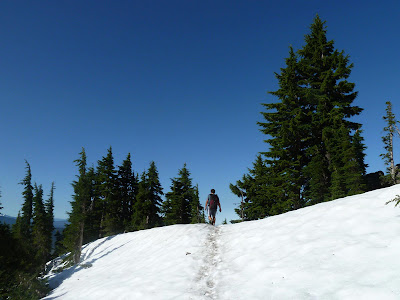 The snow started as patches here and there. But after a half hour it had overpowered the path and we were just following prints, no trail. We were on the lookout for a cairn which marked the climber's turnoff to Three Fingered Jack. But with all the snow it was impossible to locate any landmarks. So we kept hiking, mostly traversing along the mountainside in thin forest. Here's a shot of Pete with our destination in the background. 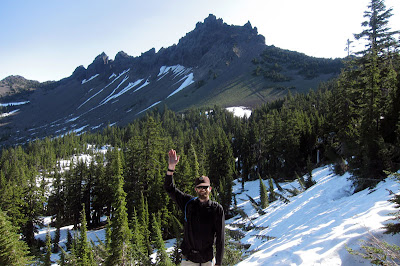 The footprints ended at a Hungarian named Bob. He was huddled under a tree and looked ill prepared for the environment. He was on his way to Cascade Locks about 100 miles North but at this point wasn't sure which way that was, or if he was headed North or South, or if he should just forget about hiking and camp where he was. He said he'd camped last night on a sloping bank and it had been miserable. His boots were soaked. His butt was soaked. He looked bewildered.

Pete offered him some water. We chatted for a bit. Then we left him and headed up through the snow to the ridge somewhere above us. About a half hour later we topped out on the ridge. We found a shady flat spot where I tied up Annie. 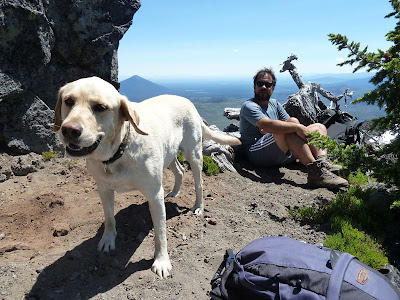 The photo above by Pete shows Black Butte in the background, an old volcanic cindercone which will be recognizable to fans of Deschutes Brewing. Their porter is my staple beer. 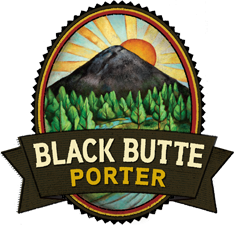 Shortly after leaving Annie the climbing got more interesting. We passed a series of gendarmes leading to a slightly overhanging ledge which forces the climber to bend over, followed by a very exposed steep section. This section is called "The Crawl" and is relatively easy, maybe 5.1 or 5.2. But the consequence of a fall would be serious injury or death. Fortunately it gets climbed enough that the rotten holds have long ago been broken off by other climbers. The rock was solid with many holds. This photo shows the Crawl (circled) being climbed by the party before us, with the red line depicting the rest of the summit route. 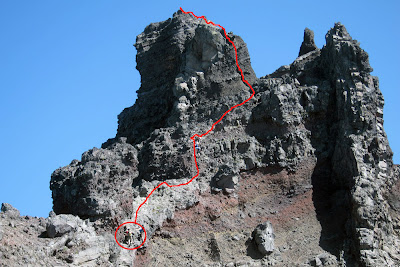 Pete hadn't done any serious climbing before and he wound up doing The Crawl sight unseen, unroped. At the level section immediately above I asked Pete how it had gone for him. He said that at one point he'd asked himself "What the heck am I doing here on this bare cliff?" a question I've often asked myself. It's a question that always presents itself forcefully as the most central issue, always at interesting times and never with a clear answer. I love that question. I think I should marry that question.

A few hundred feet above The Crawl came the crux, a 40 foot knob wall to just below the summit which was relatively easy but unprotectable. Here's the party above ascending it. There isn't much room at the top, so we waited until this party and another group had come back down before proceeding. 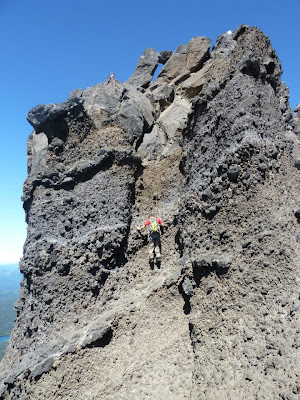 At the top of the knob wall a strange colony of ladybugs had nestled into a crack. There were hundreds of them. I have no idea what they were doing there above any other flora or fauna. They were excellent climbers. Do they ever wonder "What the heck am I doing on this bare cliff?" Probably not. 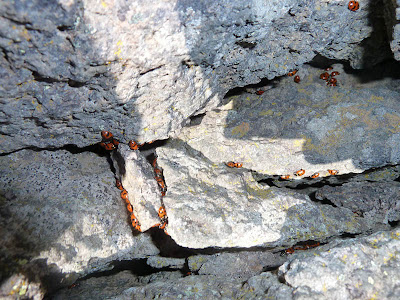 Here's Pete ascending the last bulge below the summit, just past the ladybug crack... 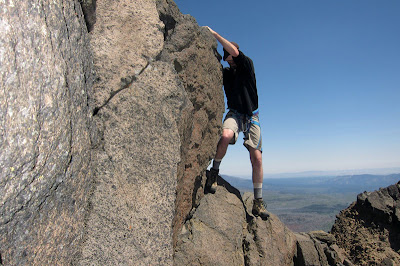 And on the final summit block, a slightly unstable conglomerate of volcanic tuff. Classic Oregon scrapheap. 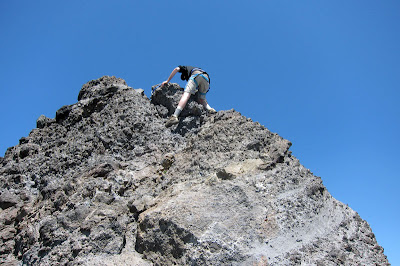 Pete and I sitting on the summit, 7844 feet. Mt. Jefferson is the big pyramid in the background: 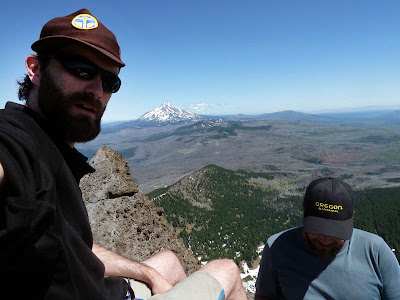 The way down was a bit easier. We rappelled off the summit down the knob wall and a short hike brought us back to The Crawl. Since The Crawl is a traversing ledge the rap proved a little tricky. Pete had never rappelled before that day, and I wanted him to go first so I could ensure he was fastened in correctly. He attempted to take an angle descent. 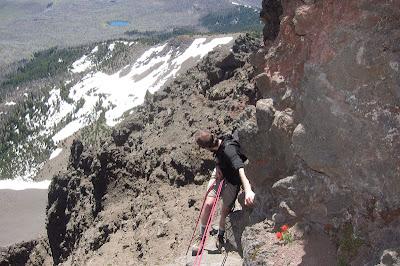 But he couldn't quite hold the cliff and wound up swinging wildly back below the anchor, right to the spot he needed to be. He ribbed me later about missing The Decisive Moment and I have to say he was right. Would've made a great photo. Oh well. From there it was a short scramble over rotten scree to the bottom of The Crawl.

I followed with a rap, met him on the ridge and we descended to Annie who'd lost her shade by now and was rather thirsty. This was the first flat spot we'd seen in a while so we decided it would be the lunch area. Pete broke out the monster sub he'd made that morning, avacado, cheese, lettuce, mustard, tomato, on a huge roll. There was even enough left over for Annie. Sandwich at Annie. After lunch Pete made a goofy pose leaning on the distant summit. 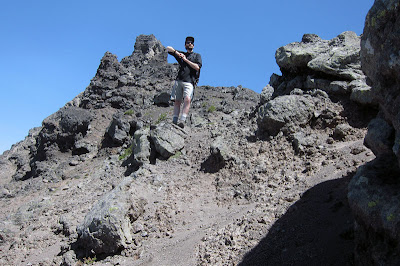 We scrambled down scree and snow to footprints leading South. The PCT again. It wasn't long before we ran once more into Hungarian Bob who'd moved about a mile along the trail but was still unsure which way he should go or how to proceed or if he should just camp right there. This time we didn't chat as long. The prints made a clear path. The weather was clear. One way or another he was almost guaranteed to survive.

The 5 miles back to the trailhead went fairly quickly. We solved more shit. We even planned a bloggers backpacking conference. That morning I'd been anxious to leave the parking lot and sound of nearby Highway 20 but now it was the opposite. After a long hike there is no finer sight possible than the reflective gleam of a windshield.

We reached the cars, pulled off our boots, and cracked open the last three remaining beers. Then Pete had the brilliant idea of using the melted cooler water as a foot soak. So we removed the food and had at it. I could only keep my feet in for about 10 seconds. I'm an ice cold wimp. 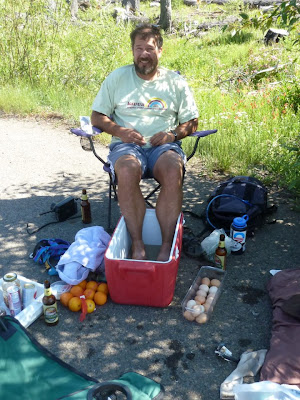 Pete lasted longer. I captured him with my last Instax photo. 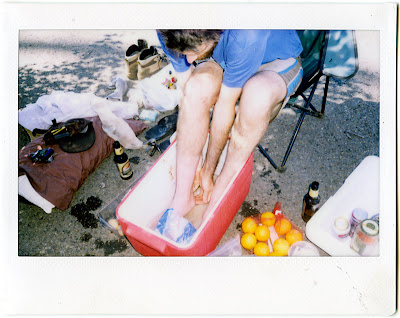 But alas we couldn't soak all day in a filthy cooler. Pete had a punk show in Portland to attend that night. I hadn't been home in three days so I had to deal with domestic duties. We dumped the cooler water, packed up the gear, and piled into our respective cars. Pete was borrowing a late model BMW with touch sensitive trunk. One of those cars you hold your hands near the button and it senses you and opens. After a day of exertion it was good to have something like that, something that was automatic and easy.

Leaving the parking lot I realized it was 4:55 PM, 24 hours to the minute after I'd met Pete the day before. I think we solved some shit. Wish I'd taken notes.
Posted by Blake Andrews at 9:26 AM

I was on your turf recently for the Oregon Country Fair. Maybe not a street photographers destination, but the same family. You ever get any rounds off there?

Glad to have you back on the web.

I love Country Fair. I have been many times over the years and often with a camera, but I have missed the last few. I think 2009 was the last one I attended. I'm becoming less a fan of crowds as I get older.

Well told tale. If I had known you guys were up there, I would have waved. I'm in Terrebonne.

Is it just me or does this fire look like a camel?