I realize Letters From the People is based on a hoky premise but it's still one of my favorite photo books. Find letters and letterlike forms in the real world and create an alphabet of them. It's the sort of thing you see in kids magazines. But something in Friedlander's approach is so earnest and probing that it grabs me. You get the sense he's endlessly curious. And of course the book isn't just a straight alphabet. The later pages morph into more complex messages and graffiti. Truly a landmark for any photographers interested in found text.

Anyway I was reminded of LFP yesterday when I stumbled on this page. As with many photo topics, Google and Flickr have put their mark on the photographic alphabet thanks to Thomas de Bruin. How long will it be before we begin seeing complete messages created from Flickr pix? 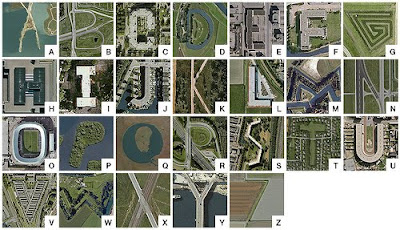 Google Earth Alphabet by Thomas de Bruin
Posted by Blake Andrews at 8:18 AM

Nice sharing with this informative blog.

Who the fuck are you, some commercial cyborg? Please get off my blog.