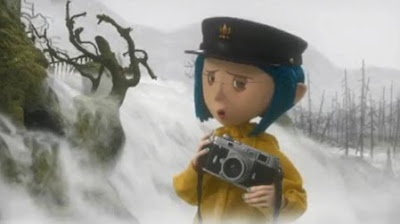 Last weekend we finally got around to seeing Coraline. It proved to be a pretty good Halloween pick for young ones, moderately scary but no real blood and gore. About a quarter of the way through I was surprised to see Coraline pick up a Leica (an old M2 or M3?) to whip off some snapshots. You don't see many Leicas in animated films. Someone involved in production must have had a camera fetish. That's great, but the Leica scene (shown above) shows it being used to take a slew of flash photos which doesn't look possible with that camera. Oh well. Good film anyway.

I'm out making photos. B is on hiatus for a while.
Posted by Blake Andrews at 7:26 AM

Coraline was a good piece of film. Was great to see some stop animation done the old fashion way instead it all being CGI.

I haven't seen the movie since it first came out, but I remember taking note that even the frame lines during the through the finder scene where a match for my M3. Most movies usually screw that part up and just use a SLR view for everything, Oldboy being one example that quickly comes to mind.