Of all the photographs I saw at last month's Photolucida Portfolio Walk, I think my favorites were by Gordon Stettinius. 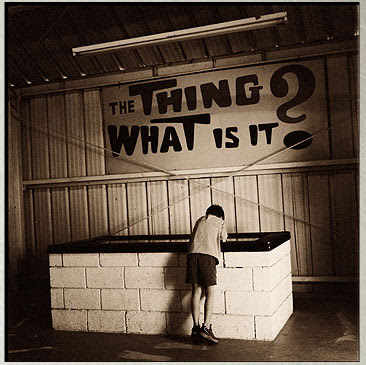 The Thing...What Is It?, Cochise, AZ, Gordon Stettinius
Stettinius isn't the type of guy to dream up some grand project and then execute it. Instead he carries a camera with him everywhere, usually one with a plastic lens, using it to gather visual nuggets wherever he is. The resulting photos show a wonderfully sharp eye and warped sense of humor. 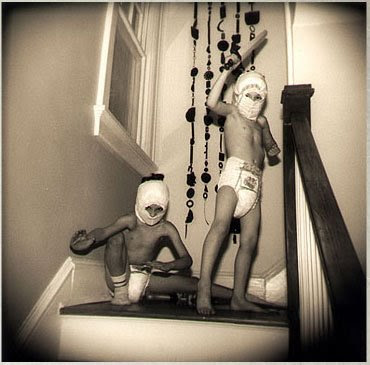 Walker and Henry, Richmond, VA, Gordon Stettinius
The photography-integrated-into-life method is decidedly unfashionable. The huge majority of photographers I saw at Photolucida were more project oriented. The prevailing model is to develop a concept of something that has photographic potential —often of personal interest but not always— and then methodically take photographs of that project until a body of work is created, with the ultimate goal of showing the work at Photolucida or similar venue. 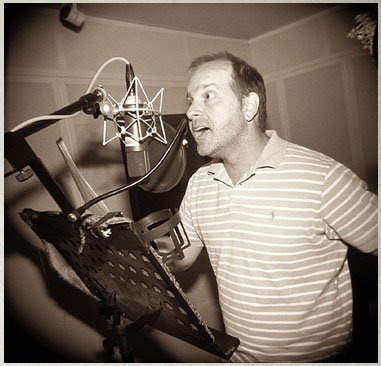 Mike, Gordon Stettinius
The potential pitfall of this method is that the resulting photographs can seem secondary to the project. Often the artist statement conveys all the information required and you needn't look at more than a few photos to get the gist of it. Such projects may be appropriate for the idea-centric art world but they enslave photography as a tool, not a lifestyle. 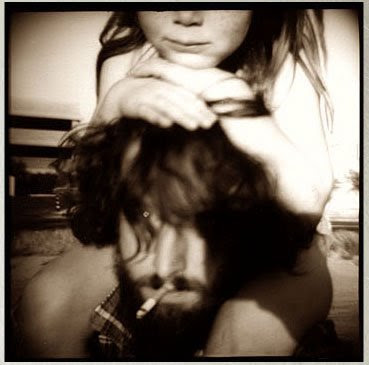 With Megan, Tucson, AZ, Gordon Stettinius
I think photographs should come first. Arrange them in projects later if you must or else leave them as is in a big loose stack. Either way, photography that is integral to life seems to me to be the strongest because it comes from purest motivation: the very simple need to translate the world into photographs. Of course I am biased because this how I approach my own work, but it's what I like to see in others too. 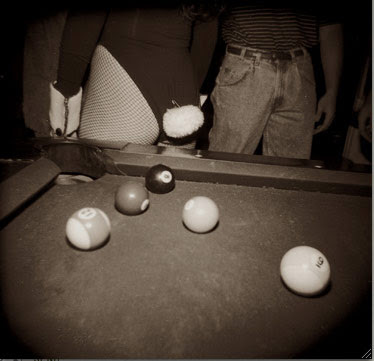 Bunny Tail, Gordon Stettinius
Is this enough? For most curators, collectors, etc, probably not. I'm guessing that Gordon Stettinius' photos received a lukewarm reception at the reviews. He was probably told he should edit, focus, develop a storyline, whatever. He was probably told his photographs don't serve any broader story, that they're just observations. Exactly! Observation is photography's central requirement. Thinking is secondary. Shoot first, ask questions later, perhaps in a blog post.
Posted by Blake Andrews at 8:58 AM

I agree wholeheartedly with you there. But I have to say that I do feel the pressure to work on a 'project', even though it's not my natural inclination. It heartens me to see photographers such as Anders Petersen, Lee Friedlander, Michael Ackerman etc. who seem to be able to make specific projects while also treating photography as a way of life. Ideally, I'd like to be able to do both...

Amen brother, couldn't agree with you more. I love the idea of photography accompanying one's life and then, over time, letting the imagery gather itself into little puddles of different ideas and themes. Great post.

Or you could define the project so that it requires you to walk around with your camera. Best of both worlds, maybe.

I think project-based photography is fine. I've seen a lot of great bodies of work in that mold.

I just think there needs to be more space for photography as an end in and of itself. Folks who carry a camera around and find things are an overlooked segment. All the attention is on projects, with the expectation that all photographers should conform to that model.

There are many valid paths.

Projects and daily shooting can work together very naturally, but for me moments present themselves more readily when the idea of a project is secondary or altogether absent. Otherwise it's, "oh, that's interesting, but does it fit my theme?" I like to be surprised by what I find, and I appreciate that element in the work of others.

Agree with what MP says. For a lot of "diaristic" photographers, there are motifs that become obvious over time and in some cases grow into consciously pursued projects. And sometimes unconsciously pursued, but recognized through a post hoc editing process. Emergent projects?

This Henry Wessel interview really drives home the point that good photographs are there every day, right in front of you. In your neighborhood.

"pitfall of this method is that the resulting photographs can seem secondary to the project. Often the artist statement conveys all the information required and you needn't look at more than a few photos to get the gist of it."

I see this so so so often when helping people with their work, and I'm glad someone came out and said it so succinctly.

It reminds me of an occasion in London a couple of years ago when I came across a couple dancing the tango against the grey backdrop of the South Bank. I think it was an outdoor lesson, and it seemed like something you don’t see every day.

Just after that I came across a group of trendy young photography students photographing rubbish bins. When I described to them the potential photo opportunity up the stairs, they thanked me but said they were doing a project on "waste".

I found it vaguely depressing that none of them could step outside their "brief" for even a few seconds to investigate. Also my own photo of the dancers wasn't very good...

"photography that is integral to life seems to me to be the strongest because it comes from purest motivation: the very simple need to translate the world into photographs."

That's quite a lot of assumptions you make in one sentence. Of course you have every right to your (subjective) opinion, but personally I think photography can only be divided into two types: good and bad. And good work always comes from "the purest motivation" whether its project-based or not.

NB, that's just my point. A lot of photographic projects that I see don't seem to be motivated by the need to translate reality into photos. They're motivated instead by the need to complete a project. Too often the project comes first and the photos serve menial duty. It's certainly possible to make "good" photos this way but I think it has a tendency to create overthought images.

ABC...Always Be Clicking. Shoot everything you find interesting and sort it out later.

As you know, Blake, I am one of those daily diary shooters. Having a camera with me at \i{all} times is a semi-religious obligation. I make some frames every day. Most are rubbish. But as you say, there are repeated themes as I go through them later. Once in a while, a project coalesces around this - "Big Hair and True Love" was probably the last time that happened clearly for me - but mostly my projects come together editing, wading through big stacks of prints and throwing them around the floor. That's my method.

The more I look at on-line photo magazines, the more I see lots and lots of empty photographs with jargon-laced statements attached. All project-conceived, with no there there. Paul Russel's example of the people not bothering to look up from the bins to see the tango dancers is the perfect example - that Paul did not get a great photo himself is secondary. At least he looked up: he saw.