As good as Obama has been so far, he's had a few stumbles recently regarding photography. The decision this week to block the release of additonal prisoner abuse photos is antiquated and miscalculated. The argument that the photos will somehow strengthen the enemy is the same tired premise that every head-of-state drags out to muffle embarrassing documents. Worse, the whole effort is futile. One way or another those photos will become public and Obama may as well get on the right side of history before it happens. Wake up, Obama. Information wants to be free, and it will be. 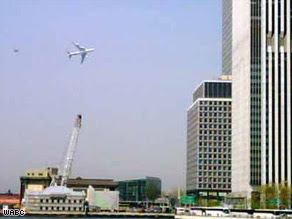 The week before was the incident with the Air Force One photo op over Manhattan. What were they thinking? Not only were citizens alarmed but many authorities were caught by surprise, including Obama himself.

My question is why couldn't they just recreate the event in Photoshop? Why photograph the real plane instead of just pasting it into a background? Normally this type of photo tampering would bother me but with such an obvious PR image, what's the difference? An Airforce One postcard isn't journalism. It doesn't need to reflect any real event, a fact that for some reason the plane's PR handlers did not comprehend. Heck, you could paste Air Force One into any old background you want. 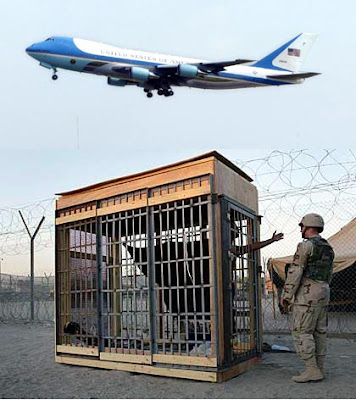 Air Force One occupying a post-Photoshop mental airspace
Posted by Blake Andrews at 7:48 AM