The pandemic's grip is gradually loosening (at least in the U.S.). A few days ago I found myself in a real-life, nuts and bolts bookstore. Smith Family Books in downtown Eugene, to be specific. Their used photobook section had been a regular haunt in pre-pandemic times, but of course Covid, bla bla bla. You know the story.

Aside from my mask it was just like old times at Smith. I can't say their selection had much changed from a year ago, but it hit me differently this visit. Tastes shift over many months. Some books which I'd previously ignored struck me with new interest. Meanwhile, others seemed less exciting now than before. After browsing for a little while I wound up coming home with two, Mark Klett's After The Ruins and Car Crashes & Other Sad Stories by Mell Kilpatrick. Both books discovered by chance and acquired together for about the price of a six pack. That's the sort of experience that's hard to replicate online. And trust me, I've tried.

As a comparison, I ordered Meg Hewitt's Tokyo Is Yours a few weeks ago. There aren't many people who live farther from me than Meg, and it's been entertaining to track her book's long meandering journey from Australia to Oregon. In fact it was in Eugene just this morning. Now it's in Springfield. Hmmm. I guess it's not quite ready to settle down yet. 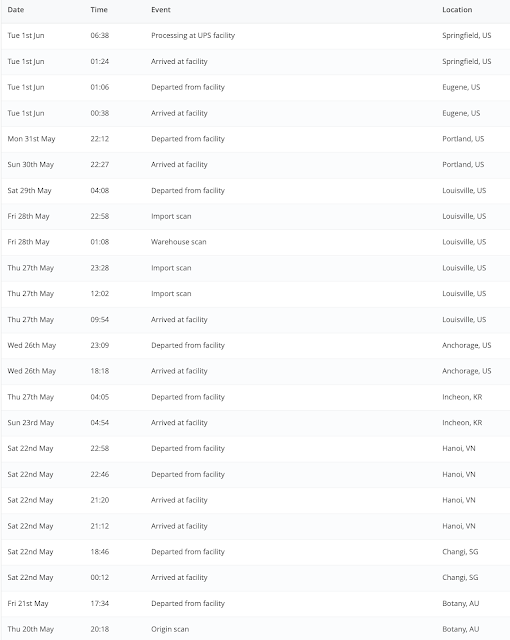 Along the way I Shot Tokyo has made stops in Singapore, Vietnam, Korea, Anchorage, and Kentucky. Yikes, this book has traveled through all sorts of exciting places. I'm jealous. It's been a spectacular tour. But when these exotic locales are filed into a rote shipping list, they transform into something rather ordinary.

Have I merely found the banal in the spectacular? If so, Car Crashes takes a similar tack. The book (with excellent printing, by the way) is a recent edit of lost work, the archive of a bygone photojournalist rediscovered by curator Jennifer Dumas decades later. This lost/reborn schtick is a recurring theme in photoland, but I haven't tired of it just yet. 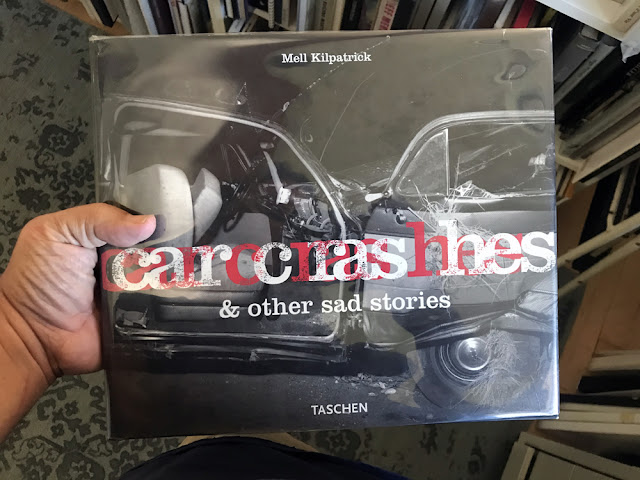 Mell Kilpatrick was a self-made autocrashdidact who bullied his way into a late career at the Santa Ana Register at age 47, simply by hanging around and obsessing. Soon enough he was head of their photo staff. From that point he became something of a regional Weegee, documenting the never ending stream of local accidents and crime scenes in 1950s Orange County. His pictures are in the same general ballpark as the great cigared one, and also Enrique Metinides. But they are rawer, gorier, and less consciously artsy than either. Kilpatrick shot police scenes more like a technician, pure kill shots recording blood, guts, and debris with the mechanical efficiency of an old school reporter. Just the facts: What, How, Where, Who, etc. Looking at his pictures at my kitchen table last night, it struck me that Kilpatrick had found banalities in the spectacular, like a book shipped around the world.

I think much of contemporary photography is headed in the opposite direction, away from spectacle. I could name some examples (such as this, this, this, this, or this) but I'm sure you can think of your own favorites. The spectacular has long been vanquished in most photo quarters. The vernacular humdrum carries the day. One could trace it to back to New Topographers perhaps, or art schools, or maybe just general societal malaise. Who knows. Pandemic restrictions have only exacerbated the situation.

On a recent edition of his podcast A Small Voice host Ben Smith asked Bryan Schutmaat What advice should young photographers be leary of? Schutmaat noted that art photographers in MFA programs are commonly taught to avoid exotic/spectacular subject matter, and to focus instead on plain material found nearby. In other words, they're told to shoot like Robert Adams, not Ansel. In this brave new world spectacular car crashes might be far down the list, somewhere below a decrepit shop front or a blade of sidewalk grass.

All well and good. But the potential problem with this approach according to Schutmaat, is that boring material can lead to boring photographs. How true! He cited Adams, John Gossage, and Paul Graham as tantalizing counter examples. All have photographed seemingly plain scenes, often in interesting ways. But of course those guys are exceptional. They make it seem easy, and most students attempting the same trick will get caught in the weeds. To convert the everyday into something noteworthy requires experience, and a measure of talent, and even then it's a challenge. So we're awash in boring photos—at least I feel that way most days—and it's hard to parse out the noteworthy.

I had a chance to shoot my own spectacular car crash a few months ago. I was driving home from Portland to Eugene one evening, the same drive I've done a thousand times, straight highway, 65 mph, enjoying some tunes. But this time was different. Just past Salem was a row of semi trucks backed up in the right lane, moving very slowly. By the time I saw them and slammed the brakes it was too late. 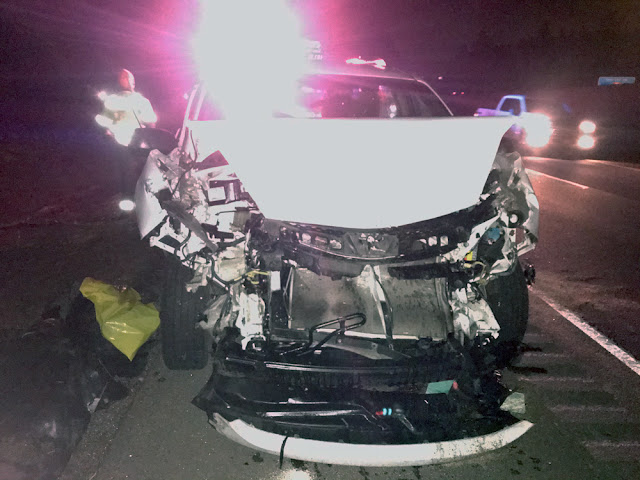 People say time slows down during an accident, that your entire life passes through your eyes or whatever. That wasn't my experience. It all happened pretty fast. But there was a strange normality to the chain of events. Even as my van was slamming into the rear of the semi in front of me, part of my brain was observing patiently, as if it were just another daily event. Once again I'd stumbled on banality in the spectacular.

If you've ever noticed that bar hanging down near the back tires of 18-wheelers, that's what stopped me from plowing straight under the trailer. Instead I came to a rather abrupt stop, my car in a heap. Airbag deployed, engine block totaled, the full deal. The good news is I was fine, and I don't think the semi-driver felt a thing. Maybe a mosquito-sized nudge. A few good Samaritans helped my car off the road, cops came, medics, a tow truck, etc. There was a routine quality to their actions which felt reassuring.

The pandemic has shifted all judgements about what is or isn't mundane. It's the most unusual event of my lifetime. I've never experienced anything remotely similar. Yet within just a few months of its onset, I had adjusted my mental compass. Social distancing and masks and quarantining felt, well, not quite normal. But they were part of the everyday fabric, no longer worth noticing. When things like that become routine, who knows any longer what is unusual and what is common?

In 2019 I would have been very excited to see people in masks on public streets. A great photo op! How special!  That was then. Now I'll be happy if I never see another mask again. When all of this craziness is over I'm going to collect my mask stash in a pile (they now number a few dozen) and incinerate them. It should be spectacular.

So great to have a new column (I love the interviews also, even most photographers are total strangers to me). What an experience to be in a car crash! I hope we dont need another one to get you write more often :-)
I also plan to make a big mask fire as soon as possible. Here in third world, back to normal seems like utopía. Vaccination is moving slooooow. Having covid was my 2021 creepy experience (even getting it súper mild was scary AF).
Be well and keep writing that good (your photos are not bad either :-)
Abrazo

Geez! Anything for attention...

Glad you're alive and well for a few more snaps- boring or otherwise!

All experiences, positive as well as negative, show us that every situation we have been involved in, every action we have taken, serves to grow and make us reflect.
I'm glad to know you're okay. Very nice your article.

Photo of the car was gut wrenching to see, so grateful that you're okay! Love, Mom

Gosh Blake. Sorry to hear about the accident, but glad that all the safety protocols of the car functioned correctly. Always a good read. Glad you are still finding, finds.