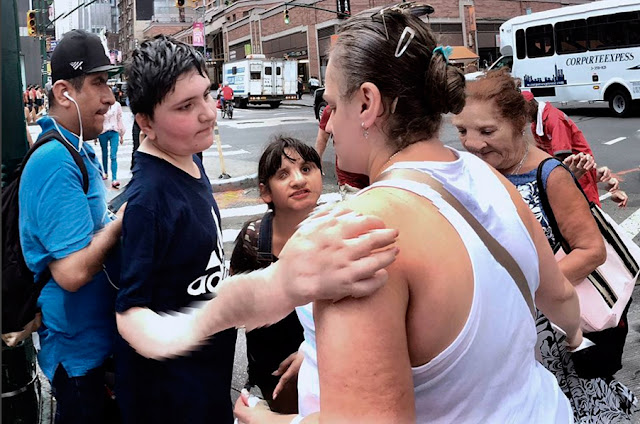 Below are comments on this photo collected in the past few days from various web sources. So far the consensus opinion has been almost entirely negative, but I'm open to new thoughts. What do YOU think? Like it, slam it, I don't care. Just curious...

"...Blake Andrews should permanently delete the photo and swallow his pride. Such a shame! When you have a crap of a photo like that as the photo of the month for your collective, it represents everyone within the collective and not just the photographer who took it..."
—Tim Huynh

"On "that" photo, you know the one "The Death of Street Photography?" I think there is a game being played as I am pretty sure something that bad could never be voted upon as photo of the month, especially as the vote was by the iN-House team. Rubbishy bollocks. A ruse."
—Adam Maizey

"Yes, it's a shitty mediocre photo though."
—Kelly Stuart

"I love distorted images but that one is not worthy of destroying a collective over."
—Russ Rowland

"...it's a pretty weak presentation if its uniqueness is only inherent in the manipulation by the algorithm. Either way, I don't think it's a very interesting photograph other than the fact that it is now controversial."
—Richard Andrew Sharum

"Who cares it's a terrible frame, of that there is no doubt."
—Ryan John Lee

"I don't think the chopped up aesthetic is pleasing. So basically you have ho-hom moment propped up with the gimmick of how it was made. To some, it seems this represents a sort of "fresh" experimentation. To me, it comes across as a bored photographer giving himself a needless challenge."
—Chris Plunkett

"Not a great photo."
—Nancy Oliveri

"About the picture in question: I don't care much for it. Whatever oddness factor that might have made it appealing or interesting comes from the iPhone's Panorama algorithm and its randomness...."
—Ricardo García Mainou

"How can a picture that deforms the subject's appearance as this picture does be classed as street photography and if this is the best that in-public can produce in a month then my respect for them as a group has diminished."
—Malcolm Ganderton

"I would be very interested to hear members defend this photo, inner turmoil set aside. I don't think the chopped up aesthetic is pleasing. So basically you have ho-hom moment propped up with the gimmick of how it was made. To some, it seems this represents a sort of "fresh" experimentation. To me, it comes across as a bored photographer giving himself a needless challenge."
—Chris Plunkett

"I thought so too... not a photo I would fall on my sword for."
—Michael T Sullivan

"...Before realizing the manner in which the shot was taken, which wasn't the first thing apparent to me, the impression I got was that I was seeing a minder taking her intellectually disabled charges on a trip from their shared-living facility....That is a kind of shot that I generally avoid taking in the first place, and in editing, if I were to find a shot that created that impression I would think long and hard about putting it out there..."
—Harvey Arche

"Sad to read this. The image isn't even that interesting, seems not worth arguing over..."
—Panacea

"When I first saw the picture I thought my son had done a Minecraft screenshot on my phone."
—Adam Maizey

"My grandma's basement smells much better than this. I didn't like blake's image, but..."
—David Wilson

"Crappie photo but who cares how it was taken. Having a definition of what street photography is silly. More importantly does the photo move you! This photo doesn't."
—Aristide Economopoulos

"Whatever the technique used or the manipulation made, the important thing remains to know if it is a good or bad picture. In this controversial photo, I see nothing that arouses interest or questioning. It looks like a trivial image capture of a surveillance camera."
—Laurent Roch

"The picture is crap and not worth the problems..."
—Superfocal
Posted by Blake Andrews at 12:27 PM

Meh..I think it's mildly amusing. I think the effect of the panorama algorithm (if that's what did this) is worthy of further experimentation. Where exactly was this photo featured to receive all the backlash?

I far prefer a couple of others you made, Blake, using the same or similar process:

and especially this portrait, where the process is in line with your "Dylan Goes Electric" title too:

As with any process & experiementation, it's gonna be hit or miss. I don't love the photo in question, pretty much as Harve expressed -- it is ugly, without redeeming factors, but I applaud your pushing parameters, Bob... I mean Blake.

It’s such a head scratcher people can’t eveb begin to rationalize it. This is what it’s all about. This is a photo as much as it’s a feeling. People don’t like feeling.

I’m not saying this is your greatest image but this shit cracks me up.

go ahead and chase that serindipity

I have a set if work prints that you gave away a few years ago. They were excellent.

Not this. Nothing to see here.

Seems to me the issue is about whether or not the photo falls under the category of "street photography."

Then you have to define "street photography." I thought that's a big part of what In-Public is, defining that term.

Is the photo a street photography photo? To me, no. (I'm a bit of a purist.)

Is it interesting outside of that?

To be honest, I thought you were doing a lot of these with the Noblex. And if you were, that'd be a different can of worms because that's film, even if the swing lens doesn't jibe exactly with the decisive moment thing.

Interestingly, despite the cheap thrills of distortion, there's some real empathy fighting through in that look and embrace between mother(?) and son(?).

I can't believe people are STILL arguing about "street or not"! I think its a pretty exciting frame. Every corner is full of little details. It's very interesting, and it is incredibly photographic. It seems that's "controversial".

And the best thing? - it seems like a bored photographer giving himself a needless challenge... Maybe that's what makes it fresh.

I think this is an interesting photo, the connection between the two people in the foreground is intense and all the other subjects are neatly scattered across the frame. There's a lot of noise - digital and other - and I guess that is the kind of life we live now. So to show some compassion in this context is actually quite touching in my opinion.

All this street photography, Turpin, In-Public etc. bullshit is pointless. I love what you are doing and what you have done before, don't ever stop exploring.

It's a shame the discussion is mostly about if the photo fits the label of Street Photography or not. The "discussion"should be about the photo itself.
And talking about that: i'm not fond of the appearance of the shot, BUT i do think what you are trying/the process is really interesting. For me the fascinating part of photography is the element of time. The capturing of the split second. And you are messing around with that in a new way. I'm very curious where you will take this.

I was responding to the original context of the issue, rather than Blake's posting here.

The photo was posted on In-Public's web site as "Photo of the Month."

Frame the question differently, and you'll get different answers.

I don't give 2 about the street cred, the thing is... does it fail or succeed to whatever extent, because of or despite the distortion? And to those most critical of the distortion, why do I have the nagging suspicion that some would be considerably less vocal had it been analog in nature (eg- light streaks caused by outdated film or leaky, creaky film bodies)...

I think the photo is awesome, especially if one doesn't know how was it taken, and is not aware of the autostich panorama. If one *is* aware of it, then it becomes more awesome because it has great composition, monster like characters who are still undeniably human, multiple hands appearing as some skeletal monster in the right corner, line of white buses giving it perspective, altogether pretty damn awesome. Things working against it are that it doesn't have photoshoped colors, contrast, or fake black and white. :D

As a freestanding image I can see it printed four feet across in a fine art gallery with a hefty price tag. The danger with ploughing technical furrows is mannerism, it may lead somewhere fascinating, then again it may be the new HDR. Either way it isn't going to get through new puritans of street photography's Salem.

Run with it and see where it takes you.

Harvey Arche here. In the blogpost above you've quoted me as saying, among other cherry-picked comments from the brief dialog I had with Richard Bram at David Solomon's FB thread, "it's an ugly photo". This fictional addition is entirely your own creation - I never said it or implied it. The issue I was discussing with Richard had to do with ethical considerations.