A million pebbles in the driveway

It takes a certain amount of chutzpah for a young photographer to publish an eight pound book called "Monument". That's basically what Lee Friedlander did in 1976 with the first edition of The American Monument. If the title didn't get the message across, the mammoth size did. This was not  a mere collection of monuments, but a Monument —capital M!

Friedlander was a cheeky forty-two at the time, and beginning to loosen the reigns of his tightly packed documentary style to incorporate vegetation, open space, and reverie. As Szarkowski described it, the shift was "away from irony, from the glittering visual joke, and toward a more direct (and complex) description of subjects that he found important and beautiful." Eventually his subject matter would be expanded to include, well, everything. But in 1976, for his second photobook, Friedlander focused on monuments.

As luck would have it his social circle at the time intersected with Richard Benson, just coming into his own as world's premier photographic printer, and Leslie Katz, a high-end publisher. Together they formed a sort of Holy Trinity of photobook production.

Katz's Eakins Press took its stylistic cues from the archaic world of its namesake, and The American Monument felt like something one might find in an antique shop. It had a thick cloth binding, with regal type and gold flourishes garnishing the cover. The tome was roughly 12 inches by 17, its wide pages (91 of them, with 213 photos) mounted on detachable screw posts to allow removal for display. They'd look beautiful framed on a wall—the duotone separations prepared by Benson were immaculate— but it's doubtful many owners took advantage. The book was just fine as is, thank you, and too precious to tinker with. An unadulterated copy now fetches roughly $2,000 on eBay. 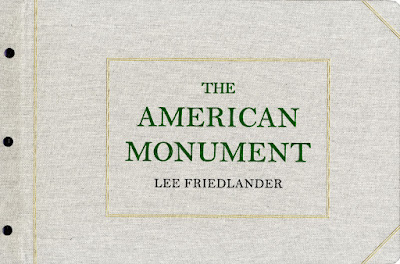 For book lovers with less disposable income there's good news. Eakins Press has just released a second edition of The American Monument. In most ways it is indistinguishable from the first. There's a slightly altered cover design and a new afterword by Peter Galassi. The paper stock is reported to be slightly different. But in other ways this is essentially the original 1976 edition now made available to a wider audience. Granted, at $150 it still ain't cheap. You gotta want it. But for those that do, the reprint brings it finally within reach.

As grand as the book is, its subject matter is not treated with the same reverence. After all this is Friedlander, the master of deadpan absurdity. Civic boosters looking to spotlight the grandeur of local monuments, listen up. Lee Friedlander is not the photographer you should hire. The American Monument shows scant spirit of pride or boosterism. As with most of his oeuvre, it's tough to read his personal feelings one way or another. Some of the photographs, for example Fireman's Memorial in New Jersey or Buffalo Bill Monument in Wyoming, seem openly celebratory. In others —perhaps the majority of photos in the book— the monuments are disregarded as so much visual filler. The well known photograph of Mechanics Monument in San Francisco tosses the eponymous statue to the side of the photo near an old truck and juxtaposed with a distant liquor store. Other frames leave the reader scrambling to find any semblance of a monument buried in the visual detritus. There's a certain Where's Waldo? quality, which is rewarded each time after sufficient searching.

There's no consistent formula, and that's the charm of Friedlander. It's the vital force which has allowed him to shoot such a variety of subjects over decades. Through it all he's remained astoundingly receptive to possibility. Each visual scene is approached anew.

If this comes across in a book of monuments as moral ambivalence or even anti-Patriotism, I suspect he is not particularly bothered. "It's a generous medium, photography," he once famously said. Statues are merely one visual element in the American vista loaded with other information. Some views are more visually generous than others. Some less so. But it's not his job to worry about which is which. His task is merely to document everything in his own inimitable way: "A bit of Aunt Mary’s laundry and Beau Jack, the dog, peeing on a fence, and a row of potted tuberous begonias on the porch and seventy-eight trees and a million pebbles in the driveway…" Add monuments to the list. 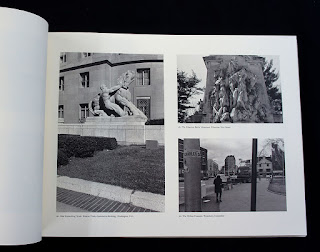 Beyond receptiveness, Friedlander's other notable trait is his prolificacy. The American Monument was made during his 35 mm Leica years, a format which allowed him "to peck at the world" in great volume. He shot and printed thousands of photos for the project. They came from all parts of the U.S., though primarily east of the Mississippi where monuments and nationalism run thickest. In the end only 213 photo made it into the book. This may be a curtailed figure, yet it's still enormous by any general photobook standard. Some photos get their own spread. Most are forced into shared space with others. The book comes in waves, with 2, 3, 4, 5, 6, and sometimes 9 (!) photos at once on a page. The onslaught never lets up, a reflection of Friedlander's manic pace. In the time it took you to read this paragraph he just made four new photos somewhere.

As with any photos made decades ago, these images have an inherent historic quality. Many of the scenes depicted are now altered, removed, developed, or otherwise changed. The American Monument is a timepiece, each photo freezing a a slice of the past, and taken as a whole the book is a portrait of America at a certain point in time. Browsing the photos one is impressed with the mundane statuesque quality of old American memorials. Heroic figures abound with arms, guns, and flags pointed skyward. They seem dated, antediluvian even, made before the flood unleashed by Maya Lin's Vietnam Memorial. As Peter Galassi points out in the afterword, the timestamp applies also to the format: "The book is an artifact of the analog age." Shot on film and printed in a darkroom, the project is a throwback.

The historical imperative has taken on some newfound urgency of late, as the United States enters a new era of monumental reconsideration, evaluation, and often, outright removal. All of the sudden monuments are a hot button issue. Who would've thought? Certainly not Friedlander in the 1970s. To him their inconspicuous nature was an attractant.

They've now become politically charged (Geoff Dyer wrote articulately on this topic in his October review). Which ones to remove? Which ones remain? How to decide? Not that Friedlander's photos pass any judgement. In fact quite the opposite. "An act of high artistic patriotism," Szarkowski calls them, "an achievement that might help us reclaim that word from ideologues and expediters." For some of the photos recorded in this book, that achievement is the only trace extant. The American Monument's second edition will ensure they remain around a while. As sure as any monument.
Posted by Blake Andrews at 11:34 AM