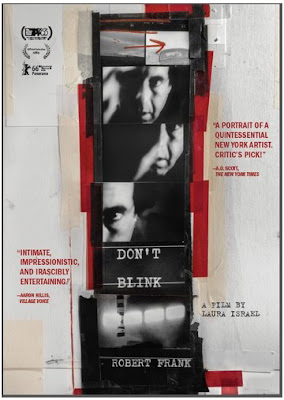 1. Hooray for a celebrity who doesn't give a shit about personal appearance. Frank's slovenly exterior positively radiates with hair ajar, shirt untucked, and last week's pants. In short, he dresses like my dad. If you passed him on the street you'd never guess he's one of the world's foremost photographers. He's long past caring and thank god it shows.

2. As frumpy as Frank appears, he's a regular Hollywood fashion icon next to Harry Smith, who makes a brief appearance in Don't Blink looking like he just woke up from a cross-country catnap. In coke bottle glasses and hirsute bramble he's the absent-minded professor gone haywire. It's long past time for a documentary film on Smith's life. I think it should be named "The Most Interesting Man In The World" a satirical take on the Dos Equis commercials. The film should debut in Portland, as he did, and feature plenty of paper airplanes.

3. Frank outlived both of his children and must bear terrible psychic scars. Yet throughout the film he is downright charming. He falls easily into laughter and seems at peace with himself. Whatever it took for him to become emotionally centered is unimaginable to me, and 100% worth it.
4. Frank's happiness may be due in part to the fact there are no screens in his daily world. No iPhone, TV, computer, or digital viewfinder. If those things are part of his life, which I doubt, they're not shown in the film.

5. You could hardly pick two places in North America more different in character than Mabou and New York City. Yet Frank blends seamlessly into each setting, and his presence highlights their few shared qualities: grit, grandeur, presence. Perhaps he is the only living person who could harmonize the two sites?

6. Frank's primary camera in recent years seems to be an Instax 200, a first generation plastic toy usually associated with chintzy snapshots or birthday parties. I'm guessing he no longer has the time or energy to process film and prints, or maybe he just appreciates the spontaneity and can't-undo candor of instant film. Dianas, SX-70s, 35 mm rangefinders, Brownies, and Instagram were also viewed as amateur toys initially before being adopted by fine art photographers. As a longtime Instax user, I'm hoping Frank's endorsement leads to a few converts.

7. Frank's assistant A-Chan makes a brief appearance in the film. I picked up her recent book Salt'n Vinegar several weeks back. It kicks ass.

8. The film doesn't dwell much on The Americans, which is fine because that book's already been analyzed to death. Instead Don't Blink spends more time with Frank's second monograph, The Lines Of My Hand. I've looked through a library copy of this book but I don't own it. It's out of print and hard to find cheap. But after seeing the film I may have to search out a used copy. The shift in style from The Americans to The Lines Of My Hand is extraordinary. Granted, the two books were separated by 14 very active years, so Frank had plenty of time to change in between. Still, I can't think of two back-to-back books by another photographer which strike such radically different visual tones.

9. Although The Americans reveals Frank's personal view of post-war America, it's essentially a book of reportage by an outsider. The locations and subjects are unknown to Frank, and his methodology is the same as any anonymous street shooter or journalist. After beginning this way The Lines Of My Hand shifts to a nearly opposite approach. The subjects are friends, family, and familiar locations, captured by Frank using large and medium format cameras (plus film reel footage?). The images are openly manipulated for artistic effect, ceding any previous claim to documentary which The Americans may have clung to. It strikes me that in moving toward a personal style Frank has put the typical photographer's career path in reverse. Most photographers cut their teeth on friends and family before feeding later on exotic subjects, and abstraction tends to be a stronger magnet than intimacy.

10. For photographers of a certain stature, a book with Steidl is a rite of passage. You fly to Göttingen where Gerhard grants you fifteen nervewracking minutes out of his busy schedule to discuss the book. For Robert Frank, who has now done several books with Steidl, the process is slightly different. Gerhard Steidl flies to your home, then waits patiently nearby while you thumb through the book dummy. Your wife also gives feedback while lounging on the couch in her pajamas.

11. I tried slogging through Pull My Daisy once long ago. Even though I personified the film's natural fanbase —young, stoned, and passing through my Ginsberg phase — I hated it. If you ask me today what it's about I couldn't tell you. I'm not sure I'm ready to try rewatching that one but I may give some of Frank's other films a shot. Until seeing Don't Blink I hadn't realized what a prolific filmmaker he was. The latter half of his life is consumed by cinematography and it seems he's made more films than photo books. Perhaps some —Home Improvements?— are worthwhile. Of course the lens is filtered. Don't Blink is made by a moviemaker (Frank's longtime film editor Laura Israel) and those folks are naturally drawn to moviemaking as a subject. The world grows more self referential by the minute, including this sentence.

12. One film critic praised Don't Blink with the promise to potential viewers, "those uninitiated into the cult of Robert Frank should be prepared for a wild and wonderful ride." Leaving aside the question whether Robert Frank is a cult leader, I'm not sure that many people unfamiliar with Frank will become "initiated" by the film.  The main target audience is probably folks like you and me, hard core photographers and photo junkies curious about a photographic legend. Is Robert Frank highly regarded among cinephiles, painters, hipsters? I have no idea how wide his fanbase extends, but if you don't yet know who he is this film probably won't convert you. He behaves, dresses, and speaks just like the guy next door. Would a film about your neighbor be interesting?

13. Don't Blink's musical soundtrack chosen by Hal Willner is solid throughout. Does Robert Frank listen to classic New York underground while relaxing at home? Who knows, but it helps the film along. Not only is Hal Willner a walking, talking music encyclopedia, he kinda looks like Harry Smith.

I could be mistaken but I'm pretty sure Frank takes a couple of photos with a digital Leica rangefinder while he's with friends in his Mabou home.

Hi John. You may be right. I returned the film so can't easily check now. Let's just say screens play a minimal role in his life.

Yeah, agreed, and the film is really great. As you said, amazing how he still manages to joke around despite everything he's been through.

Sat through a much ballyhooed screening of Cocksucker Blues a coupla decades ago- so very anxious to see all the behind stage secrets the Stones did-not-want-shown!

Never did find out, it was so purposely and overbearingly slow and boring I fell asleep round about half hour into it.