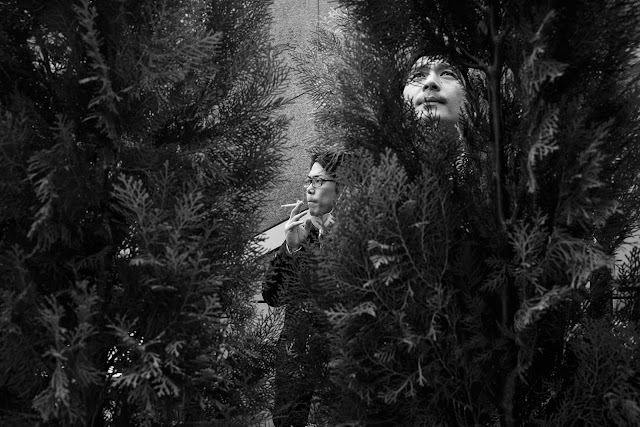 Tree man - One day I was in Japan looking for a camera shop (Yes... if you visit Japan, your camera equipment maniac might relapse). I found a smoking area in front of a train station and a group of office workers smoking. My friend told me this is how they slake off. After taking photos for a while, I saw a little hole in a tree. What if the face of a man poked out through that hole? So I tried positioning the angle to achieve that idea. He did not realize that I was taking his photo (because I was behind the tree) and looked at the advertisements on the big LED monitor on the opposite side. That’s why he turned his face up. I took many photos vertically and horizontally. Finally, I got the best shot when I almost stopped doing it. Treeman is one of my favorite photos and the one that changed my life. Many people know me from this photo because it was the 1st place winner in the Miami Street Photography Festival 2014. 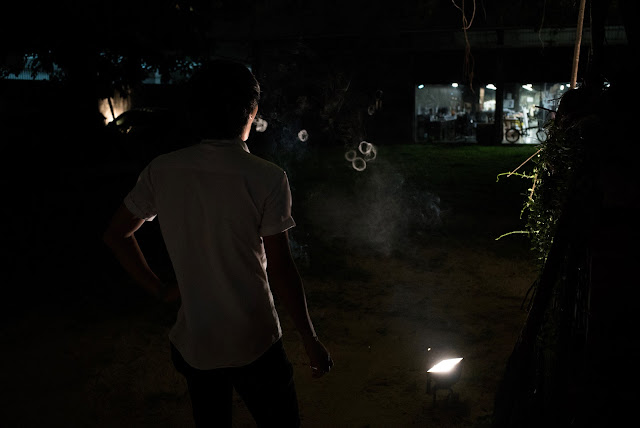 No. 89 - I took this photo last year when I went to join the Slideluck in Bangkok event. I walked around till sunset without any luck. Before the event started I saw a man smoking in front of a restaurant. He tred to make donut shape smoke. It was quite odd. I snuck behind and used silent mode on my camera. I tried to get as many circle smokes as I could in one frame. After taking a lot of pictures I reviewed all the photos at home and —surprise! — the fume in this one looks like number 89. That month I bought a lotto with this number but got nothing. At least I had a weird photo. 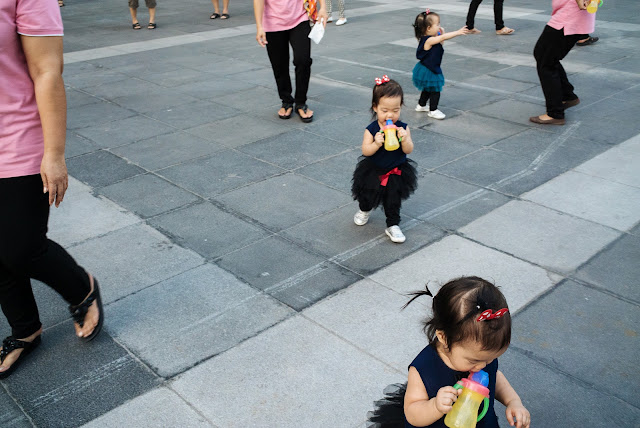 Triplets - I took this photo at the beginning of this year. I went out to meet a friend at a department store in Bangkok. After parking and walking to the gate, I noticed many people crowded around something in front of the building. They were cute quadruplets with their babysitters. I am not hesitant shooting them. I heard taking photo of children in other countries may lead to problems but in Bangkok it's a different story. I tred to get all of them in a frame but it's not easy because they are running around all the time. Unfortunately there are only 3 of them in this shot but I prefer the result because it looks like they are split into 3 groups by a magic trick. 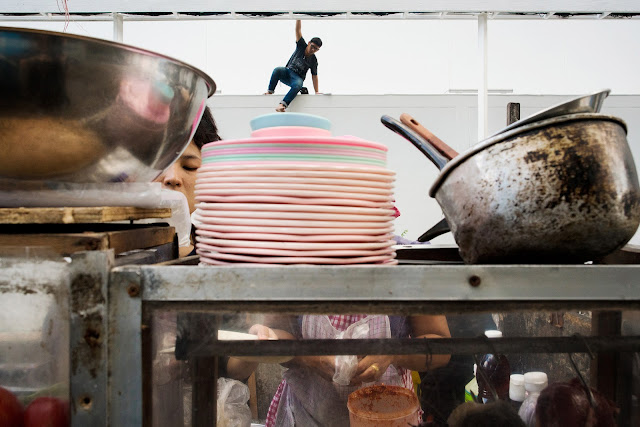 Ant man - I walked around in town recently. On the upper floor of a building I saw a man writing a note. The building itself looked clean and simple. For me, when I spot some activities on many different levels I always try to find some connection between them. I know the tiny man is quite cliché but I always try and find some way to make it special. Near that area there was a food cart with many dishes in front. So the first idea was make his legs dip into the dish. It didn't work well but I continued shooting this composition. Suddenly he reached the upper beam to help him stand up. But in the photo it's like he is jumping down to the dish below. My friend told me to see movie Ant Man after he saw this shot. 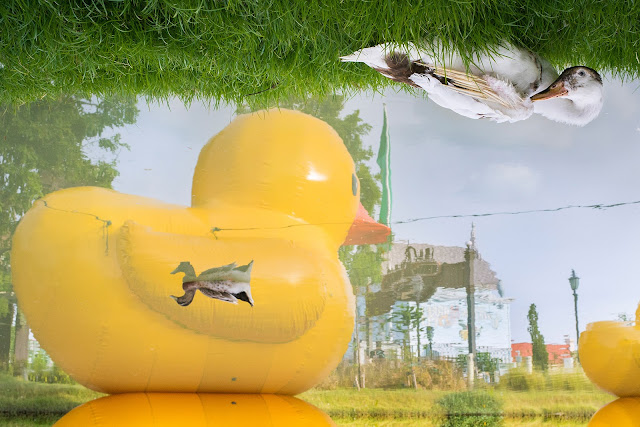 Upside Duck - Not far from my home there is a big restaurant with a large garden. Decoration of this garden changes regularly with attractive designs. The day I took this shot, the lake next to the garden was decorated with a big yellow duck floating in the center. The funny thing is there were real ducks living in that lake too! The first thing in my mind was that I should play with juxtaposition. I tried to find a duck that could compare with the big yellow one. I walked around the lake for a few minutes and found a duck sitting beside the lake as another duck was swimming in the shadow of the big yellow duck. It was a good position to play with juxtaposition. I took a just few shots because it looked too simple for juxtaposition until the duck bit its back with a strange posture.
When I came back home, I tried to rotate this frame upside down and it started working! It left the viewers confused. In my first group exhibition, many people stopped and watched this picture for a long while and tried to understand it. Many of them tried to tilt their heads like that duck. I hope you enjoy its upside down effect too! 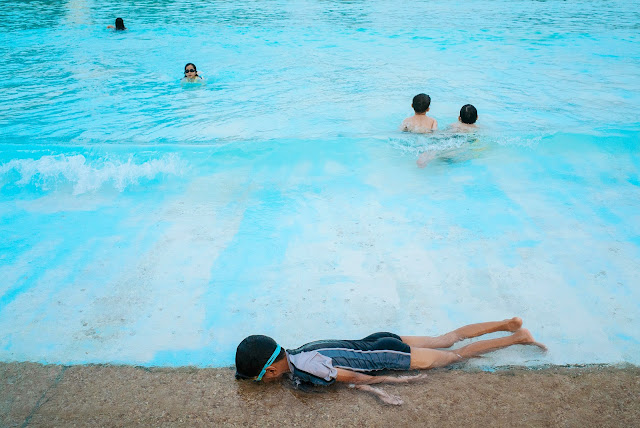 Planking - If I have no idea where to go take photos, I always visit Siam City Park at the end. It is a large water park which people call "The Sea of Bangkok" with many people and activities, and it's not far from my house. I even had a year ticket after I decided to do some photo series of this park. One day I went to the artificial sea area (which holds the Guinness world record for largest) and saw a boy. He was playing in the water by letting the wave throw his body and rolling around. In this photo he seems to lie still but in fact his body is rolling up and down. I feel lucky to have 2 boys fill the upper part of the frame and the color of the goggle strap match the pool tiles. 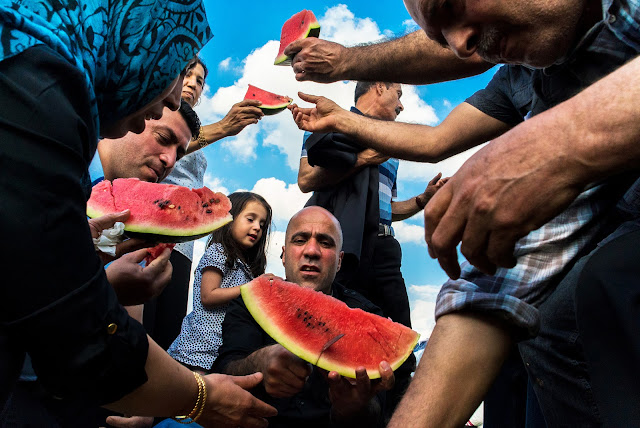 Share - This is one of my favorite photos of 2015. In July I had a chance to join the Observe collective exhibition in Germany. After the event, I went with other photographers to the Peace Festival in Münster. It was a good day to meet many photographers from the internet whom I'd never met in person before. The Festival set up in a football-size park. When we reached it, we looked like kids running to a new playground. I saw an interesting group cutting watermelon. I thought I might get some nice action from this kind of scene, so I sat in front of them tilting my camera up to get some beautiful sky and kept shooting. A good thing about the festival atmosphere is people did not care much about a camera man. The shot I like the most has a rhythm of hands stacking up watermelon. The right side of the photo has a connection of many circles of hands. It's far more than I expected in the first place. One more impression: I got a piece of watermelon from them. The sweet taste I remember till this day. 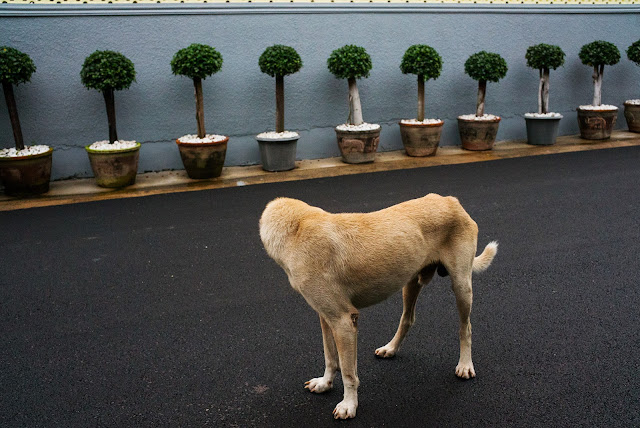 Headless Dog - Last year I entered the "365 Day in 2014" event of Street Photo Thailand. The point is to take photos every day and select the best one, then submit on their Facebook page. If I haven't enough time I always trip around my home area. I discovered a small village where people came out to exercise after work at a playground. That day the rain had just stopped, so I had not met many interesting subjects until I found a dog chasing a cat and got some pictures. Near that dog and cat group, there was a cowardly looking dog standing in the middle of the street. I'm not interested in the dog, but the background with sphere shapes is fine. So I decided to take pictures of both of them but the dog suddenly turned its head back to bite something and I shot it 2-3 times. No idea of a headless dog came in my mind. I just wanted to shoot a dog and interesting background, that's all. 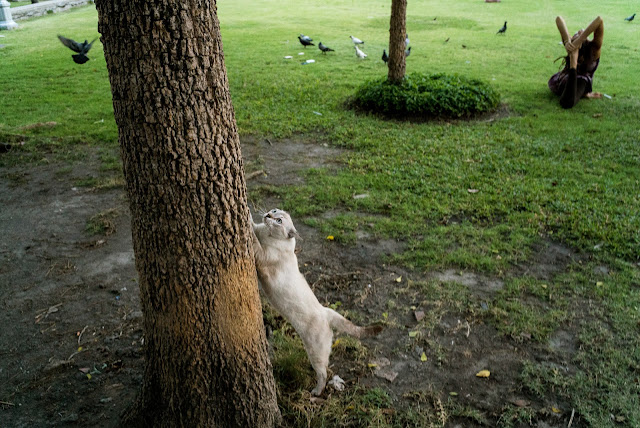 We love yoga - I got this shot from a park near Chao Phraya river. In fact I turned the wrong way and it led me here. The yoga group looked like a good subject but I decided to walk around and find something to be a foreground. At fist I had a shot with a man on a bench and a yoga player in the background. It was ok so I moved on to another area. I noticed a cat hanging around nearby. I came closer but it was not afraid of me. Maybe a boss cat, I think. Eye to eye for a while, the cat walked to the tree and started scratching it like crazy. I jumped in trying to frame the yoga girl in composition at the same time. Out of nowhere, a bird flies up the left side of the frame, its wings looking like the yoga shape bending. Wrong turn but luckily the right path for me. 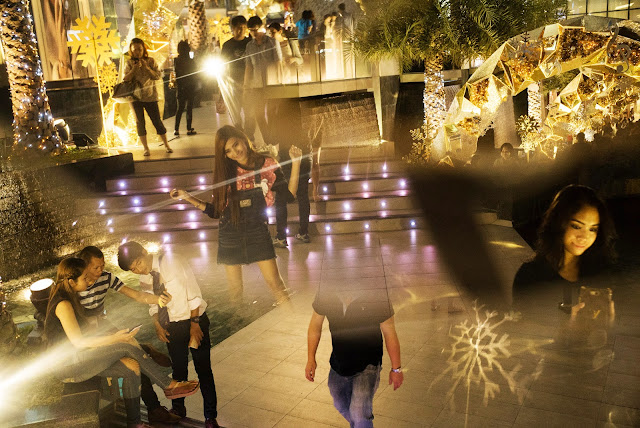 Dissolves - A few days before the end of 2014, I was shopping in a department store. I found a decorated arc with mirrors cut in a music note shape. It was really shiny and a lot of people were doing selfies around this area. At first I wanted a reflection of one body attached to another pair of legs but the result was not satisfying. Then I noticed the shape of the note mirror in my frame so I moved closer and closer. The edge of the mirror was out of focus now and the result looked like a multi-exposure. I waited for people passing by, shot a lot of this scene, and I prefer this one with a man waking exactly over the line on the floor.
Posted by Blake Andrews at 4:05 PM

I love hearing the story behind the photo. That last shot is awesome. Such an interesting collection of people within the frame.