Printing pictures in the darkroom this week I noticed weird lettering on the edge of the roll: 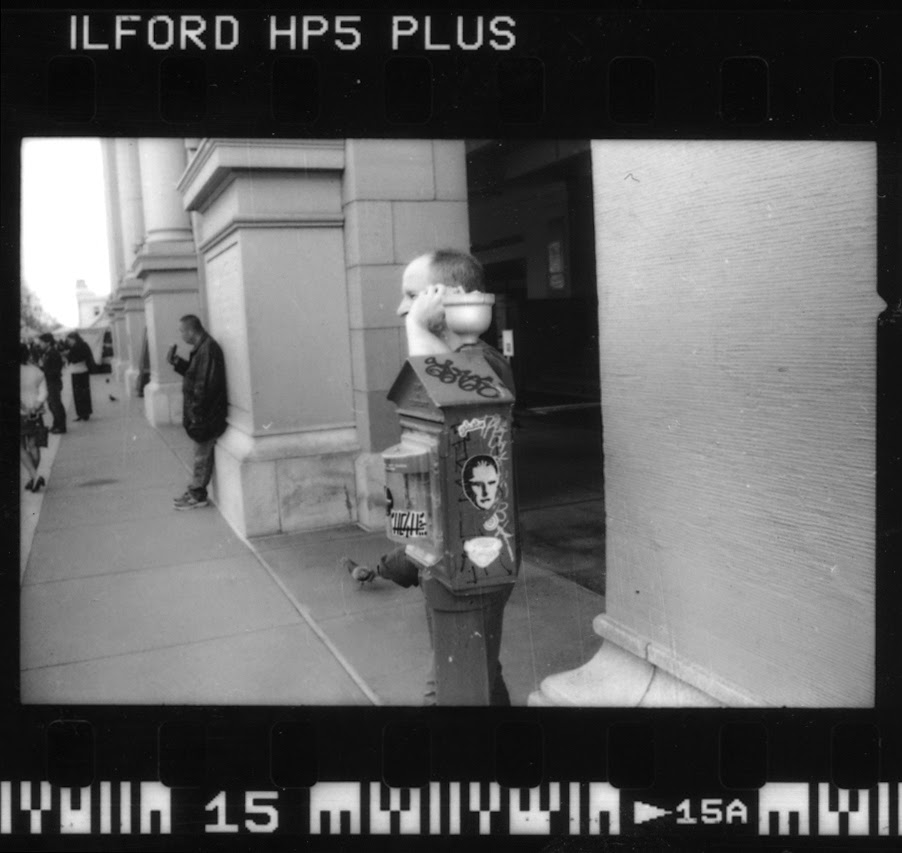 Here it is close up: 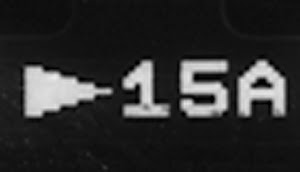 HP5+ has gone to the dark side. When I realized this I felt cuckolded. How long had it been going on? And right in front of me! All the signs were there. How had I not noticed it before? After all we've been through, HP5+ and myself.

Later that day I dug around through older negatives to find an earlier comparison. The problem is I don't shoot HP5+ much any more, and my negatives are sort of cluttered. So I had to go back to 2006 to find another example: 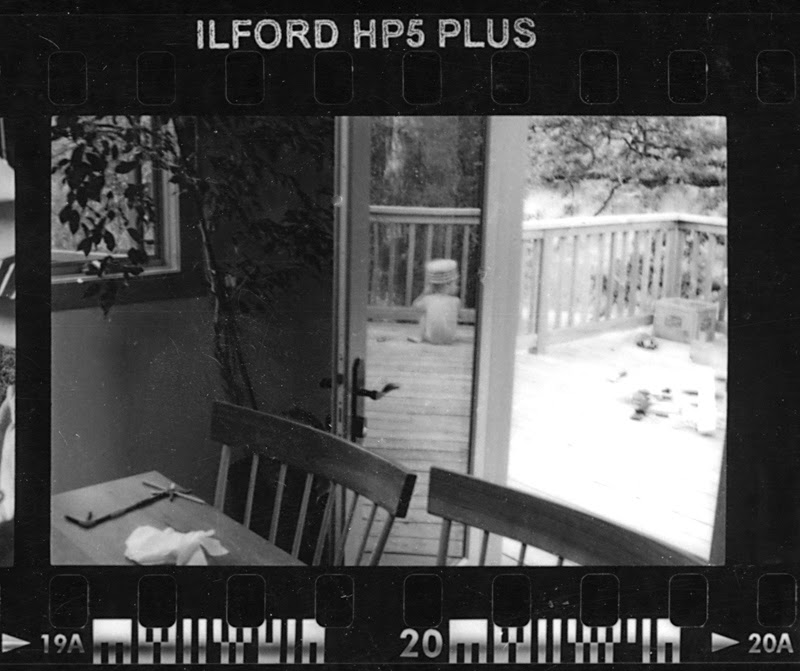 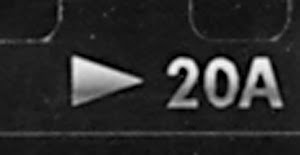 Not only was it nonpixelated, but the typeface was more organic and attractive. It looked, well, filmy.

Sometime in the past 8 years Ilford has switched manufacturing to encode their film with a digitized look. In one sense it's not a big deal. The words are beyond the edge of the frame and don't affect the image. I assume the emulsion is the same. But yeah, at the same time it sort of is a big deal. These words are like a nice restaurant with the wrong mood lighting. It shouldn't affect the food, right? But it's there, and you think about it as you're eating. It leaves a funny taste in your mouth.

I had prepared a long-winded digital rant here but it's pointless so I won't. Most readers know I'm a film lover. But we're star crossed. The ship has left the dock. It's steaming across the sea and I'm sobbing into my hanky, the star-crossed lover. But at least that hanky's real. I can feel it on my face. I don't mind digital but that's another lover. Must I share my true love? Can't it stay on its side of the ocean? Does it have to bleed into everything? Every. Little. Fucking. Thing?

Instead I get this:

I'm telling you. Every. Fu..., No, sorry. Promised I wouldn't rant. It's the holiday season. No need for cynicism.

One refuge from the pixelated world is the local flea market called Picadilly. I go every two weeks. It never changes. It always feels like 1978. The items on display, the people, the dingy setting in a building at the old fairground. The scary thing is I'm beginning to blend in there. I look like I belong to 1978 and maybe I do.

Everything about Picadilly is a time warp, and I hunt there mostly for time warp photos. But this time of year it's also a good place for last minute stocking stuffers.

Here's one I found yesterday. 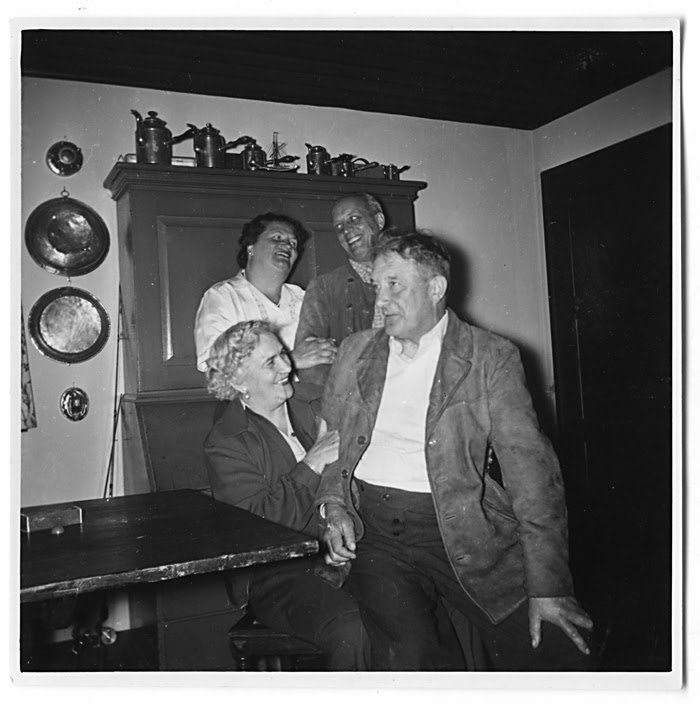 These folks look like they're enjoying life. Maybe they're celebrating a major holiday like Winter Solstice. Or not. It's hard to know. Either way the composition of the photo is quite astounding. Everything is in just the right spot. An accountant couldn't line up the elements any more precisely.

The visual rhythm is similar to this photograph by Atget, one of my favorites.


Atget was a human Picadilly. He didn't bother keeping up with the times around him. He shot glass plate negatives all the way to the end in 1927. By then almost all other photographers had upgraded to film. He jilted innovation. And technology in turn jilted him. But his photos. Mmm-Hmm.

I seemed to be in an especially anti-pixel mood yesterday. Maybe it was HP5+'s infedility. Who knows. But I was drawn even more than usual to the pictures with imperfections. Arbus: "You see someone on the street and what you notice about them is the flaw." I think the same logic applies to photos. I found several with strange light leaks, and one with bonus head cut off. 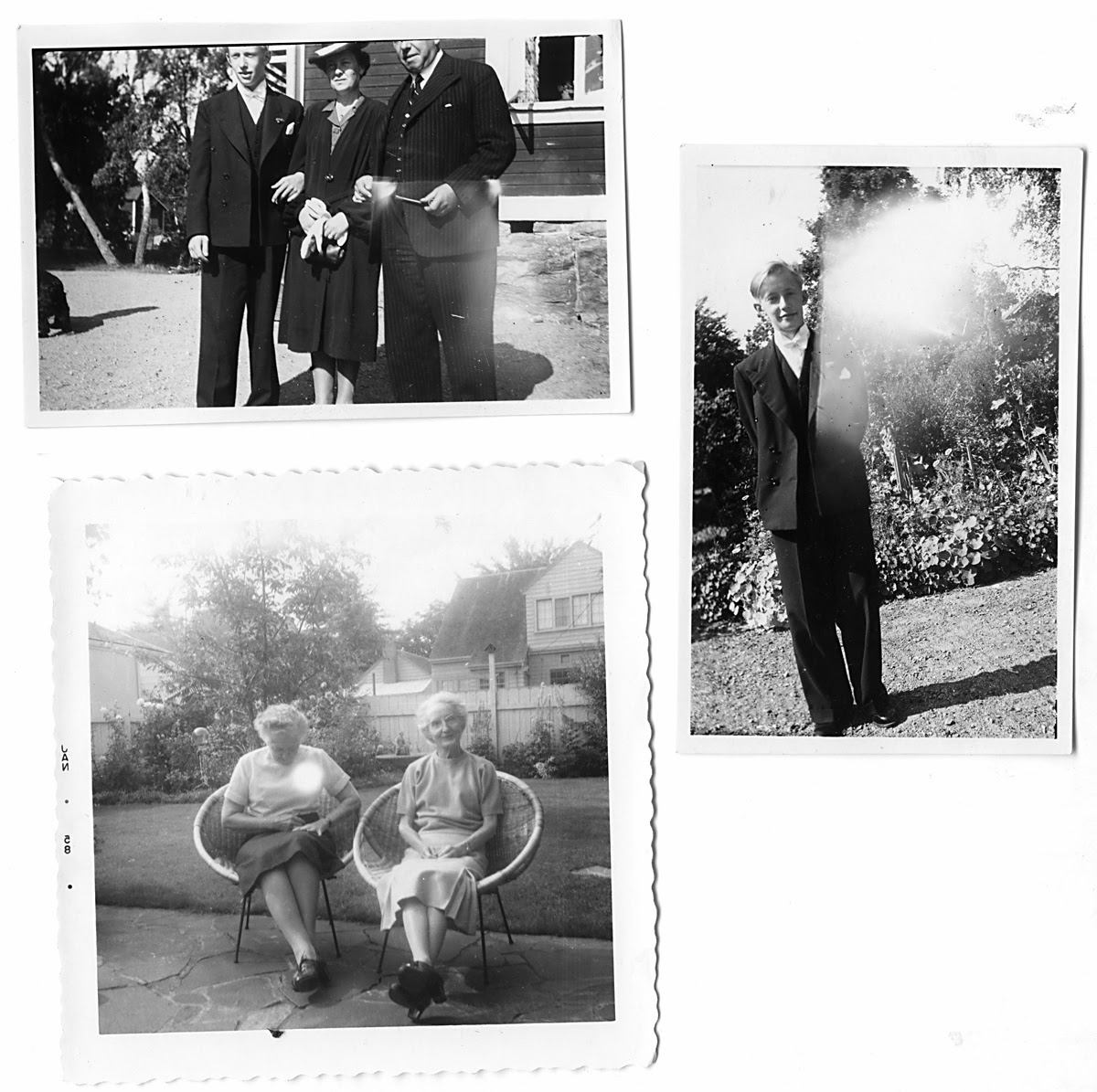 The top two make sense to me but I can't figure out the woman with the hole in her chest. What is that? Is it a misplaced snowball? Is it a snowball that refused to line up and march with the others? Is it an Atget light bulb?

I've got one of my own like that. It's a misplaced rainball actually, shot on the darkest day of the year a few days ago. 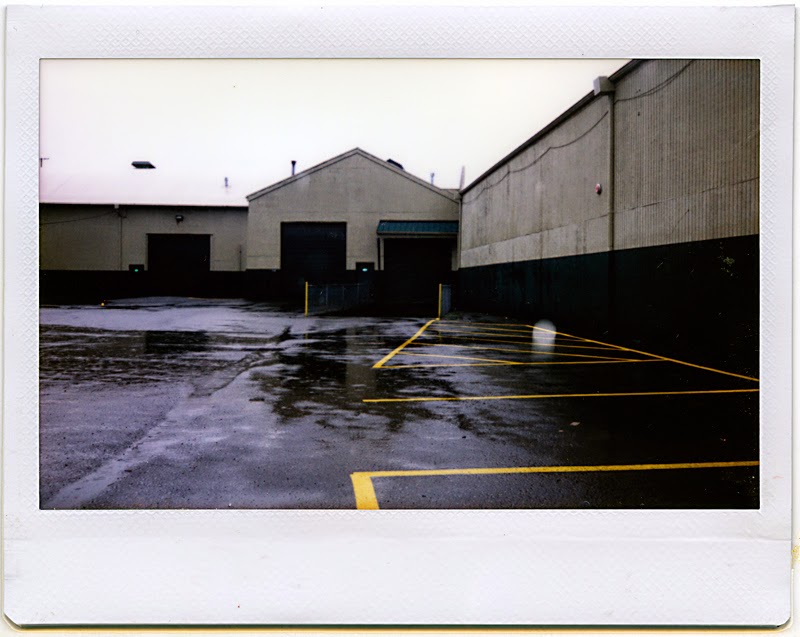 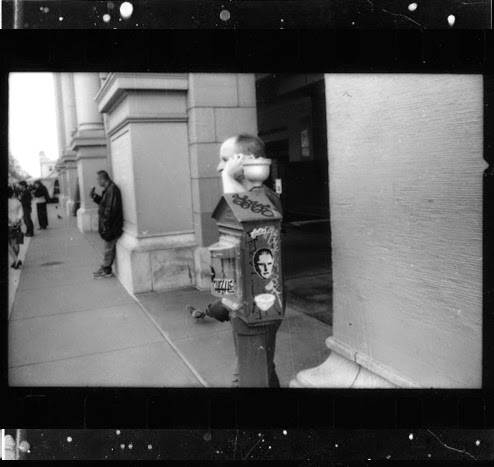 Ornaments on the tree. Flaws front and center. Six months of ever longer days ahead. Now I'm in a holiday mood.
Posted by Blake Andrews at 2:48 PM

I embrace both worlds. I go and come back from both sides of the sea. By the way, Kodak and Rollei Retro films have the same digi pattern in the numbers and names at the side. I Can't remember Adox.

It's a slippery slope, isn't it? See, even the earlier HP5 sample already has the bar code on the side, for machine processing. The new numbers are presumably to make it easier for the machine to ocr the number. I guess it was inevitable--even in 2006 it was already the case the most machines didn't print optically--they printed from scans. I agree that it takes away a bit from the pleasure of holding and viewing a strip of negatives. But at this point I'm just glad Ilford is still in business, and they can do whatever they need to do to keep putting out film.

...just ran down to the darkroom to check my TriX...phew, non pixelated numbers....for now