Q & A with Shane Lavalette

Shane Lavalette is the Director of Light Work in Syracuse, NY. I asked him a few questions about Light Work's print program, basketball, and related topics.

BA: Isn't the whole idea of prints rather old fashioned? Why should someone collect photos as prints? Why not view them on screens instead? Digital files are convenient, free, and cause minimal production hassles.

SL: We’re becoming more and more immersed in the screen but at this point it’s still just primarily driven by information. Many major magazines and periodicals are struggling because we don’t necessarily desire that content in the same way, but monographs, artist books, and certain art magazines that give attention to physical detail are exploding. An image illuminated on screen is a beautiful thing, but is also fleeting. In the same way that a book is tactile and feels—I say feels, because it’s really not—permanent, a print offers a distinct experience. Digital images on screen are seductive but they lack a certain energy that an object made by an artist holds forever.

Are you saying a screen image is more ephemeral than a print? I think one could argue the opposite. All physical objects deteriorate while digital files last indefinitely. And if it's a matter of physical detail, just wait a few years. Screen images will eventually contain detail beyond what any human eye can detect. Isn't the collection of physical prints driven by a desire for possession as much as by any inherent material quality?

Yes, and they’re both ephemeral when it comes down to it. I say “feels permanent,” because nothing really is. It’s a common misconception that digital files last indefinitely. In theory, sure, but the vessels that we use to store files are “deteriorating” (becoming obsolete) faster than most prints. Visit any museum or image archive and you’ll find they are much more concerned with how to deal with this than what to do about print longevity. There are a lot of concerns, because it’s not something that has been entirely figured out. For now the print fulfills a desire to possess in a way that a digital file does not. As I mentioned, we’re becoming more and more of a screen-based culture and our ideas or interest in permanence or even ownership are will likely shift with enough time.

Do limited editions have any natural place in photography? Or are they a purely market-driven mechanism?

It’s a strange paradigm, for one of photography’s greatest strengths (reproducibility) to be suppressed. Not all artists participate in the idea of editions, but it’s difficult to name a photographer that sells well who does not. As someone who collects things, it’s exciting to think you’re holding something unique, or limited, so it’s certainly market-driven, but also simply plays to human desire. We want to imbue significance into the things we own or make.

Why is it more exciting to hold onto something unique or limited? A song can be exciting to own despite the fact that there are millions of other copies. The same with a favorite T-shirt or book or film. Why is a photograph any different? Why aren't photos sold for $.99 on iTunes?

The music industry and the art world have a lot of things in common, but there are also many ways in which music and visual art are very different experiences. Viewing photographs online for me personally is in some ways equivalent to the .99 cent download, or even a free streaming service. It’s readily available and completely enjoyable to listen to (or look at). But, to keep the music analogy going, seeing a considered exhibition or photobook is a bit more like sitting down with an LP, opening it up, putting it on, and really listening. And then having something limited or unique is a bit like seeing that band play live, where you know you’re experiencing something special. This is all coming from someone that still enjoys vinyl records, cover art, sleeves, and the physicality of music, so this is all very subjective. I have certainly seen a few online or app-based photographic projects that are immersive and powerful, but not with the same consistency as printed photobooks. It’s a platform we are still figuring out how to use to the best of its ability. Someone with a degree in Human and Media Psychology could probably give a better answer to your larger question.

Can popular opinion convey any meaningful information about a photograph? Or about any piece of art?

Art is a subjective experience and things that may not have value to the art world or culture at large are not necessarily insignificant objects or ideas. That said, there are a lot of things we can glean from popular opinion, even just in the basic sense—for example, the way that images or videos go viral or are understood as controversial, problematic, or meaningful by a culture at large. This is a very interesting phenomenon which we are able to watch more rapidly and globally than ever before.

In your opinion, what is the role of mistakes in photography?

Photography was birthed through experimentation, and mistakes. When I became interested in photography, however, like many artists I became obsessed with ‘mastering’ a craft and reducing mistakes. Yet the more and more I’ve grown in my personal practice the more I’ve seen the value in taking risks and being open to failure as a good thing. At Light Work, for example, when we have an artist come to do a residency for a month, I often observe many successes but I think an artist who leaves with a month of mistakes learns just as much. It propels you forward still. Some of the best photographs I’ve ever seen are just beautiful mistakes.

Which sort of photography do you generally prefer, photos by pros or photos by amateurs?

An intriguing picture is an intriguing picture. I find myself equally lost in work by professional photographers are I do in family albums, anonymous found images, or even utilitarian images that were just meant to describe something or someone, advertising, passport photos, etc. Of course, I am interested in looking at pictures that have complex ideas behind them, but it doesn’t always make them more compelling images.

You prefer amateur then?

There is no preference. The author can be an important and interesting part of a photograph, but for me it starts with the image.

What photographs (by yourself or others) do you have on display in or home and/or office. How often do these photos change?

I have some early color prints I made while I was a student at the School of the Museum of Fine Arts, Boston. These, while not my favorite pictures I’ve made, are a reminder of a time where I fell in love with photography and process. I have some work by other artists that I admire around the house and office too—prints by Lucas Foglia, Justin James Reed, Tim Briner, Christian Patterson, Eileen Quinlan, Brea Souders, Jackie Nickerson, Alexander Gronsky, Mark Steinmetz, among others. I have a lot of work in flat file storage, but if I could I’d frame it all and hang it up. I think it’s important to live with art.

Has being director of Light Work affected your personal photography or Lay Flat and your publishing house, Lavalette?

I’ve found that while everything I am involved in is extremely complimentary, it is still a difficult balance to strike to be able to devote myself as an artist and publisher as well as a non-profit director. My role at Light Work is all about supporting the work of other artists, and it’s a full time job that’s very fulfilling for this reason. There’s only so much time and energy in a day though. It’s a sacrifice for my personal work in some ways, but gives back so immensely. I have realized that the only way to keep everything moving along is to get more people involved, and to embrace collaboration. So many artists feel like they have to do everything themselves, and I think we’re living in a world where it’s easier than ever to work with other people to get projects done, and often better than they would be if you just went at it alone. I am an artist at heart though, and plan to keep feeding that.

To you, what makes a good photo? Choose just one or two characteristics. What made a good photo 20 years ago?

I’ve always felt a good picture is first rooted in the world, but transports the viewer to some other place—emotional, psychological, intellectual, existential—that opens one up to something, has many layers to peel back, or simply allows one to look in a new way. I think it has become less and less important to be “rooted in the world” as we’ve become more visually literate, and that is an exciting shift from 20 years ago.

Will Syracuse win the NCAA tournament this March?

Haha! Full disclosure: I don’t really follow sports, but am all about this team. Go Orange. 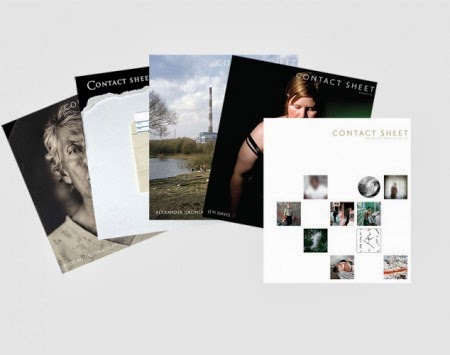 March Madness is right around the corner. Submit your Final Four guesses to me via email between now and March 18th, 2014. Not the whole bracket, just the final four teams, final two teams, and the winner. The submission which proves most accurate (ties decided by earliest submission) on April 8th wins a year's subscription to Contact Sheet.