Are you ready for listmania? It may be November but the annual year-end lists have already begun, with favorite photobooks of 2012 by ICP and Alec Soth posted recently. Both have some interesting picks, although there is a mildly depressing amount of crossover duplication. I expect many more lists to come in the next few weeks, after which we'll have a good sense of which books had the biggest impact.

As usual it's hard for me to judge these lists because I haven't seen most of the books in person. I don't often receive review copies. It's just little old me and my local library and used bookstores, with occasional visits to Ampersand, but even they don't carry everything. So these lists always give me the same feeling. They remind me that I'm out of the loop. 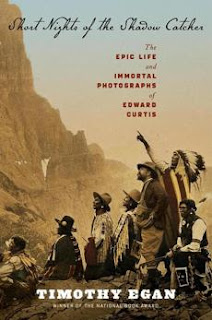 That said, I am currently enjoying a photo book which I doubt will wind up on anyone's list, because it's not a monograph. It's a historical book. The recently published Short Nights of the Shadow Catcher by Tim Egan is a fascinating account of the life of Edward S. Curtis. I hadn't known much about Curtis before aside from his photos. But the guy led an amazing life. He was raised in poverty, moved to Seattle as a teen where he supported his family until mortgaging the homestead to invest in a small photo studio, which he quickly built into the most respected in the city. He hobnobbed with Roosevelt, Pinchot, JP Morgan, and various power brokers.

Then he ditched everything --family, business, daily comforts, Seattle, etc-- to embark on a 30-year non-stop roadtrip documenting North American Indians. No one thought he'd complete the project, but the resulting 20 volume (!) set is a classic of both photography and ethnographic study. Eventually he faded into obscurity before his reputation was revived posthumously. Pretty interesting guy.

Photography plays a side role in the book. Most of the focus is on Curtis's various travels and relationships, and the closing of the American frontier which occurred concurrently with his project. But above all this is a study of North American Indians, and how they were basically fucked every which way imaginable during America's westward expansion. It's a story we all know but still worth the occasional reminder, lest we forget. And Egan is a great writer, so it's fun to revisit this period through his words.

So enjoy the upcoming season of lists. But if you find yourself tired of looking at monographs and just want to curl up on the couch with a good read, Egan's book is highly recommended.
Posted by Blake Andrews at 8:43 AM