The new collaborative photo blog insight promises to be bookmark worthy. Today is the blog's fifth day of existence. On the first day, Hin Chua created a fascinating study of Papageorge's Passing Through Eden, and it was good.

Like Chua I'd assumed the book was loosely based on Genesis but hadn't realized how literal the relationship was. According to notes spelled out in one of his lectures, Papageorge intended certain photos to communicate exact passages and the order of the photos follows the story of creation. For example, this photo is meant to be a depiction of man in God's image (presumably taken on day seven): 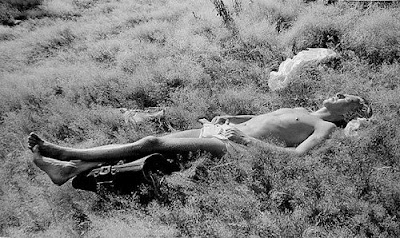 God created man in his own image
from Passing Through Eden, Tod Papageorge
As fate would have it, the day after Chua's article appeared The New Yorker (June 8 & 15, 2009) arrived in the mail featuring an eleven page excerpt of Robert Crumb's Genesis project. I found the comparison irresistible. Here is the Tree of Life as depicted by Crumb... 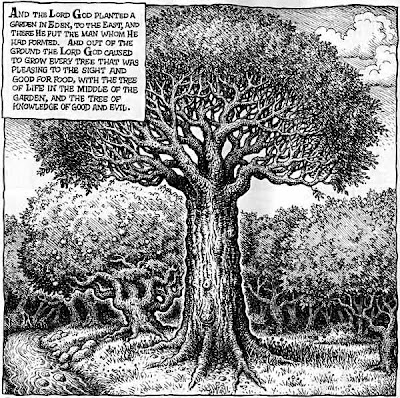 ...and Papageorge's version (speculatively selected from several tree photographs in the beginning of the book): 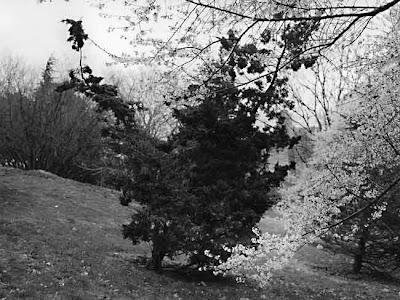 The Tree of Life
from Passing Through Eden by Tod Papageorge
A key moment depicted by Crumb... 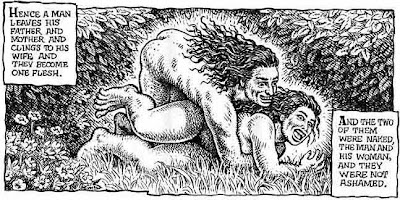 "...And Adam knew Eve his wife..."
from Passing Through Eden by Tod Papageorge
Crumb's version of The Fall... 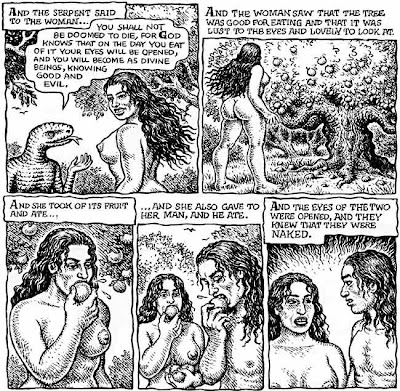 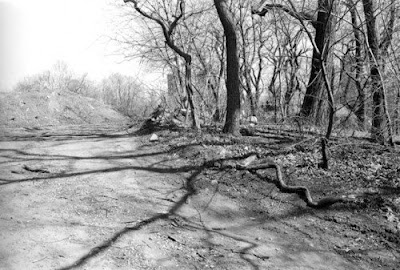 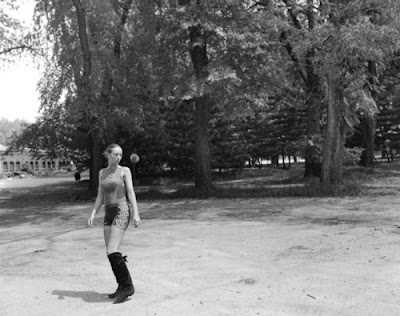 "...And when the woman saw that the tree was good for food, and that it was pleasant to the eyes, and a tree to be desired to make one wise..." 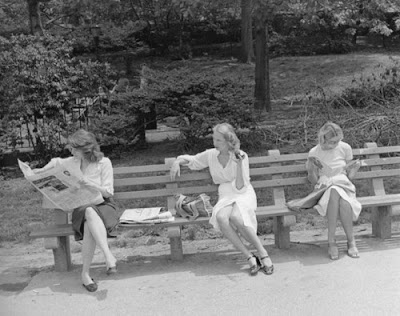 "...She took of the fruit thereof, and did eat, and gave also unto her husband with her; and he did eat. And the eyes of them both were opened, and they knew that they were naked..."

I could go on but I think you get the point. Check out the books to see each artist's full treatment of Genesis.

The thing I find most interesting here is that the role of photography and drawing seem to have switched places. Photography is usually thought of as a straightforward, descriptive medium. If you want to communicate what an apple looks like you don't draw it. You take a photo. A drawing may be a way to convey impressions about the energy or character of the apple, but a photograph provides the most direct description. 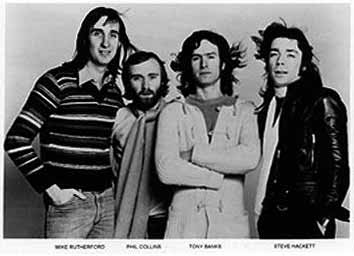 How Genesis may have looked many eons ago
Some of this is due to the nature of the story. Genesis is more myth than history, and even if such events did occur they were so long ago that no visual information exists. To describe the story requires imagination more than descriptive accuracy, and someone who can draw whatever they need to has more flexibility than a photographer restricted to actual events.

In light of this fact, the way each artist treated the story is even more impressive. Crumb's drawings are quite plain and by-the-book, especially when compared to some of his other projects which graphically imagine every possible Id layer. And Papageorge has magically pulled the story of Genesis from a series of ordinary park wanderings. Both artists offer insights into Genesis not available from the straight text, as well as insight into the roles of photography and drawing.

Posted by Blake Andrews at 7:25 AM