I've been thinking lately about music covers, and how they might or might not relate to photography. In music the idea of covering someone else's song isn't just acceptable. It's expected. Young musicians cut their teeth on covers, as many begin in cover bands trying out the songs of predecessors. It's a learning tool, but it doesn't end there. Musicians typically play covers throughout their career. Established artists will often throw an old cover into a live setlist or album as homage, and many in late career release albums of standards or favorites. And it works vice versa. Every famous musician gets covered. You expect to get covered. In fact if you're writing songs that don't get covered by others you're probably doing something wrong.

This isn't by accident. The structure of musical culture is based on reinterpreting the songs of others. The Great American Songbook, for example, is basically a collection of cover songs. Every serious jazz musician knows the fake book and every pop musician knows The Beatles' catalog. These past works serve as the raw Ur-material which connects musicians going forward, because music culture is cover culture.

Songwriting tradition is passed down through various cultures and and shuffled and edited and remixed long after the author is forgotten. Until the middle of the last century, this was de rigueur in all forms of music. The idea of writing your own songs was relatively uncommon. Maybe it was even considered borderline cocky. In the post-Beatle era the idea of pop performers writing their own songs is much more accepted. Yet covers live on, like this unforgettable Sam Chalpin version of Satisfaction. I'm sorry but you are now sentenced to spend the rest of today with this rattling around in your head. 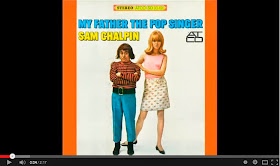 The same bias applies to music as intellectual property. Copyright generally belongs to the writer of a song, not the performer. The Electric Ladyland version of All Along The Watchtower may be the one which gets airtime. But it's Dylan who receives royalties, not Hendrix.

The same logic might apply to writing. If I repeat the exact same paragraph it could be seen as an act of reinvention, not theft. The same bias applies to music as intellectual property. Copyright generally belongs to the writer of a song, not the performer. The Electric Ladyland version of All Along The Watchtower may be the one which gets airtime. But it's Dylan who receives royalties, not Hendrix.

To be fair, it does happen sometimes. The most basic method is probably through rephotography, where a photographer revisits the site of an older photo to see how it looks later in time. Longtime B readers know I have an infatuation with rephotography which I have a hard time explaining. I just know I'm just intrigued by it. I've written about it several times, and when I visit new cities (e.g., L.A. recently) I'm often drawn to rephotograph the sites of well-known photos. For me, rephotographing a scene helps me stand in the original photographer's shoes for a moment, to try to see what they saw and wonder why they framed it a certain way.

I'm no musician but I think the same thing might happen to musicians when they cover a song. They might gain new insight into the melody or words. It puts them for a moment in the author's shoes. I like all sorts of covers but I'm drawn especially to the more adventurous ones. The less recognizable the better. The peculiar mix of influences that results when Pat Boone covers Ozzy Osbourne, for example, or Bongwater covering the Beatles is really quite beautiful. But I have to draw the line at reggae bands covering The Police. Please, for the love of god, no more of those.

There are all sorts of rephotographic projects out there, from Camilo José Vergara to Mark Klett to Christopher Rauschenberg to Brittany Marcoux to Bruce F. Molnia to Gary Shrimpling to PDX Then and Now to Dear Photograph to Frank's View and more. Some are more arty than others, but I think almost all are rooted in basic homage or curiosity, or some mixture of both. In any case they aren't generally viewed as copying/stealing but more like musical covers, a gentle revisiting.

One subcategory of the rephotographers is people who cover themselves. Nick Nixon's Brown Sisters project is among the best known, and Milton Rigovin made similar projects, not to mention innumerable amateur efforts. TOP featured a recent such photo by Carl Weese, which is probably typical of many. For me it's more interesting as a rephotographic study than as a photo. But even a simple pairing like this will cause me to look closely for a few minutes just to check out the recoverage. I just can't help it. Noah Kalina and Karl Baden have used their own faces as rephotographic subjects, creating selfie typologies. I don't know if I'd have the stomach to do something similar. Watching wrinkles and gray hair develop every day doesn't seem very uplifting.

In musical terms I think these projects might be comparable to an old touring band which plays the same song every night, but each time in a slightly new way. Sugar Magnolia, for example, was initially recorded as a 3 minute pop song, after which the morphing began almost immediately. None of the 500+ live versions which followed were quite the same, but they all pointed back to the root melody. Maybe some are still playing.


Another form of photographic covering is to make a photo in the spirit of an older photo. Alec Soth's experiments in 2011 closely modeled on Lange's Migrant Mother and Orkin's American Girl In Italy fit here, as does Rauschenberg's project Atget's Shoes. Karen Keister made a series of these in the 1980s modeled after images in Szarkowski's Looking At Photographs. The example below is from the book Photographs Updated: Similar images/Dissimilar Motives edited by Beth Goldberg, which exhibited at Sonoma St. University in 1990. In musical terms this might be comparable to Wright and Forrest writing Strangers In Paradise based on Borodin's Polovtsian Dances. There's a direct lineage but it's not exactly a straight cover.


1990 is a long time ago and there hasn't been much other scholarship on this since. Maybe photographic covers ran their course in the 1980s? In any case there is at least one other book out there which focuses on photographic covers and that's Richard Whelan's Double Take from 1981, available used online for not much money. If you're into this stuff that is the one to get. Some of the spreads from the book are here and here including the dual shot below comparing Berenice Abbott (left) and Andre Kertesz (right). They were attracted unwittingly to the same New York clock, both circa 1950. In musical terms this might be comparable to Procol Harum's A White Shader of Pale emulating Bach's Air On a G String.


Fette and David Simonton have explored this theme through Tumblrs, often bringing together clusters of photographs which share common traits. In musical terms this might be like comparing two acts which resemble one another unconsciously. Horse With No Name will always be mistaken for a Neil Young song, just as King Tuff mimics T. Rex. That's just how it is.

Then there are the artists who use covers to gently parody, the photographic equivalent of Weird Al Yankovic. Photographs Rendered In Playdough has gotten a lot of traction recently recreating famous photos. Before that it was Legos. The example below mocks Sander's Young Farmers. Sandro Miller's recent Malkovich Malkovich Malkovich hits some of the same humorous notes. No one would ever mistake these for the originals, or Eat It for Beat It. Parody provides safe territory for exploration, or at least it should.

No harm, no foul. That's how it should work. But covering another photograph often leads to trouble. It can happen unwittingly to amateurs. It can happen, perhaps wittingly, to pros. Either way the reaction is usually negative. In these cases, re-interpreting someone else's photo isn't considered covering. It's viewed as copyright infringement. In musical terms it might be comparable to The Doors stealing a Kinks riff for Hello, I Love You. If they'd just covered All Day And All Of The Night there'd be no problem. But by recrafting it slightly there's a supposition that they've disguised it as their own, and that's too far.

Maybe the same logic applies to Burdeny covering Leong. One photo of the Seine from an identical perspective might be considered as an homage. But blindly copy an entire project and recraft it as your own? That's a stretch.


A similar logic might apply to photographic reappropriationists like Sherry Levine or Richard Prince. I guess in their own minds they're creating something new, and the courts have agreed. Maybe they envision their coverage as artistic tribute, but to me it's more likely tied up in some toxic brew of collectibility, art theory, and money. In musical terms I equate these these folks with MC Hammer quoting Rick James. Homage? For me, it's closer to rip off.

Eric Doerginger's cover projects may seem similar at face value, but I view them differently. To me they come off as earnest and loving, referential to the point of being deferential. In musical terms he's like a Pink Floyd or Grateful Dead tribute band, sacrificing self identity to replay complete sets note for note. Yeah, it's hokey but what's not to love? Plus he's a Brown guy, so there's that. But who copied who?

Photographers are very territorial it seems, much more so than musicians. Maybe it's that pictures are much easier to create than songs. With hundreds of millions of cameras circulating on a finite planet the odds are good that some scenes will get copied multiple times. How many photographers have shot Peter Lik's Antelope Canyon from an identical perspective both before and after him? It's the Star Spangled Banner of photography, redone over and over  to the point where originality has been drained.

Few would bother copying Peter Lik on purpose, but similar scenarios happen sometimes by chance. When two photographers covered each other shooting the same iceberg by chance recently it almost resulted in a lawsuit. 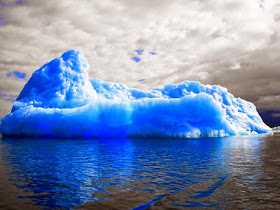 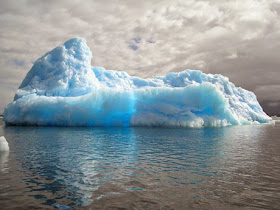 With the increased accessibility of cameras and online photography we can probably expect more such incidents in the future. I'm actually surprised it doesn't happen more often. Relax, everyone, there's enough world to go around. Some of it is gonna get photographed harder than other parts. And Burt Bacharach is gonna get covered more than Oingo Boingo, and that's OK. No one gets hurt.

But instead of photographing random icebergs, maybe photographers should direct their attention sometimes to historic predecessors. Not only is it OK to cover them, it's healthy for the medium. It keeps the good stuff circulating and makes us rethink the pioneers. It's a form of homage, like naming your blog posts after miscellaneous Zappa titles. We all know photographers are trapped in the past anyway. Why not go all in and relive it?
Blake Andrews at 10:17 AM