I think I'm going to make this Bad Timing thing an ongoing series. The latest pairing involves fashion photographer Terry Richardson. Two days after he was outed as a creep on Jezebel, an email from Photo-Eye used the unfortunate phrase "Terry Richardson-esque, LA drenched hedonist edge" in touting the merits of a newly published book. Yeah, so maybe he is an LA drenched hedonist. That may no longer be such a selling point. Does anyone proofread this stuff? 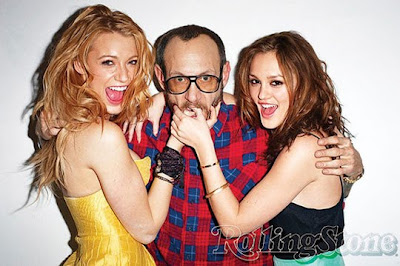 Jamie Peck, who was 19 at the time, shot with Richardson at his studio twice. Although she was prepared and willing to pose for him nude, she writes, "This man has built his business/pleasure empire on breaking the cardinal rule of asking a young girl you don't know to come over to your house and hang out naked: don't be a fucking creep."

...The environment she writes about at the studio, where she is surrounded by Richardson and his assistants, all armed with cameras (and, apparently, towels), all cheering her along, and all acting like it's the most natural thing in the world for a photographer to interrupt a shoot and demand a hand job from his model, is even more troubling. "Inappropriate" and "unprofessional" don't even begin to cover it. Given the power differential that exists between Richardson, who is old, wealthy, regarded as an artist, and vastly influential, and most of his model subjects, can the consent of these women even be said to be freely given?

The photographs have a clear Vice-generation, Terry Richardson-esque, LA drenched hedonist edge to them, but this is tempered by a kind of subtle melancholy — as if under the celebration of lifestyle there is a softly spoken lamentation, a quality which makes Deathcamp a sort of visual cousin to Brent Easton Ellis's 1985 masterpiece Less Than Zero. Signed copies arriving soon, now available for preorder.

Posted by Blake Andrews at 7:09 PM

the review doesn't sound to me that it is in favor of the culture it's describing. If it's just a colorful description, the jezebel news could be considered good timing!

I disagree. I think using Richardson's name as an adjective glorifies his style.

What if it was a book of war photos in which the review use the word Manson-esque to describe the carnage? Or what if someone used the word Polanski-esque to describe Mann's At Twelve? Don't those terms have a sense of endorsement?

I don't find any of those name-based adjectives to be glorifying at all. In this world of desensitized, violence-loving, paparazzi-following consumers, maybe, but not to me. Do you think sally mann would like your description? Would you like someone to compare you to polanski for shooting your children honest and naked all the time? I wouldn't. Do you think jock sturges and sally mann are similar because both have images of pre-teen girls with no clothes on?

ps don't forward her this post, or she'll stop reading b forever.

But that's just the point. I wouldn't expect anyone to use the words Manson-esque or Polanski-esque because those terms are pejorative by association. I think, in light of recent events, the same argument could be made for "Terry Richardson-esque."

By the way, Mann read that last comment and she's pissed at you.